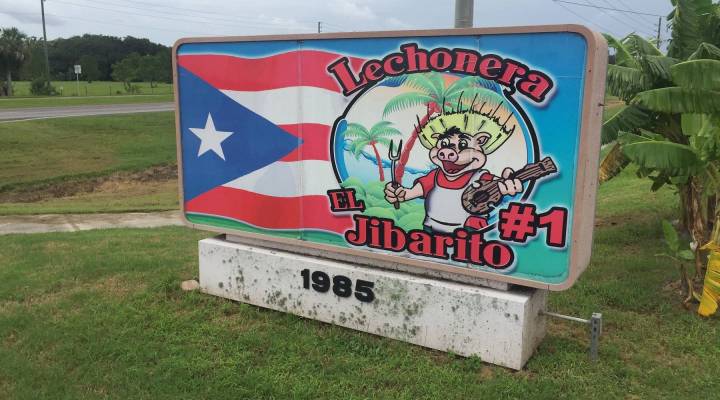 Puerto Rico is deep in debt, unemployment is at about 12 percent and some, including Treasury Secretary Jack Lew, have taken to calling conditions there a humanitarian crisis. The Puerto Rican Federal Affairs Administration claims that more than 1,000 Puerto Rican families relocate to Florida each month.

A lot of Puerto Rican migrants come to Kissimmee, a town about 20 miles south of Orlando. County officials sometimes refer to it as the “gateway to Disney World.” There are a lot of motels lining its main road – Highway 192 – but these won’t be mistaken for Disney resorts. They’re budget motels built in the 1970s and 80s. It’s where a lot of Puerto Rican families end up settling.

“We have an aspect of homelessness that is not recognized by the federal government as, technically, homelessness,” he said. “What we’re finding is that these folks are taking up residence in motel rooms.  They’re not suitable for it, though.”

Most of these motels, for example, don’t have kitchens or separate bedrooms for children.

Kissimmee’s population has increased by 10,000 since 2010 – up nearly 20 percent. City officials are reluctant to attribute Puerto Rican migration as the sole contributor, but there’s no denying its role. A lot of shopping center billboards along Highway 192 are in Spanish. There’s a restaurant, La Lechonera El Jibarito, that’s painted like a Puerto Rican flag.

During the great migration from Puerto Rico to the mainland after World War II, the majority of migrants were laborers who got service jobs in places like New York or worked in the tobacco fields in Connecticut.

Now that things are much worse on the island, it’s not just unskilled workers migrating. Steigerwald said a lot of the people moving to central Florida these days are teachers, engineers or nurses.

“That initial wave of migrants were really here for the service industry,” he said. “What we’re seeing now is more educated, more skilled work force that is moving here from Puerto Rico”

At the same time, Steigerwald said many of today’s migrants still end up getting jobs at Disney or at hotels, because the degree they got in Puerto Rico might not be recognized here, or their English isn’t fluent enough.

There’s no denying the advantages of moving here from Puerto Rico as opposed to immigrating from Mexico or Cuba, though. Puerto Ricans are American citizens, which means getting work is less complicated.

Kevin Kurtishi’s mother is Puerto Rican. She grew up in a Puerto Rican neighborhood in Hoboken, New Jersey. Kevin grew up in central Florida. He works in the restaurant business and said he sees tension between the Latino communities all the time.

“You know, to put it simple, it’s jealousy,” he said. “It’s really easy to come over here, you just get a plane ticket from Puerto Rico and jump right on board. You can grab a job, grab a license and get whatever you need to do. Whereas you know, coming from Mexico it’s a struggle for those guys.”

Walter Birriel grew up in Puerto Rico and moved from the island 10 years ago. He said it’s not that simple.

“It goes back to Puerto Ricans being considered immigrants, when that is completely wrong,” he said. “Automatically because you speak Spanish, you’re assumed to be an immigrant.”

Walter speaks Spanish most of the time. His English is great, but it’s still a second language.

Walter Birriel grew up in Puerto Rico and moved from the island 10 years ago.

Esther Rivera moved to Kissimmee with her husband and three children four years ago. She said Puerto Ricans start learning English in grade school, but the majority don’t practice and speak Spanish at home.

Esther Marie Rivera moved to Kissimmee with her husband and three kids four years ago from Puerto Rico. She says she would go back if things were better.

Rivera was a nurse on the island and her husband was unemployed. Now, he’s a janitor at Disney and his salary allows her to stay at home with the kids. This year they moved out of Kissimmee.

“There it’s like a city inside a city,” she said. “There are too many Puerto Ricans there, there’s too many Latins there. The opportunities are less because everyone wants to work. So that was the major thing that we decided, we can’t stay here because it’s going to be the same thing, like Puerto Rico.”

A lot of the Puerto Ricans in Kissimmee were born on the island and said they consider themselves Puerto Ricans living in Florida – not Floridians. Almost to a person, they want to get back to the island, if things get better there.