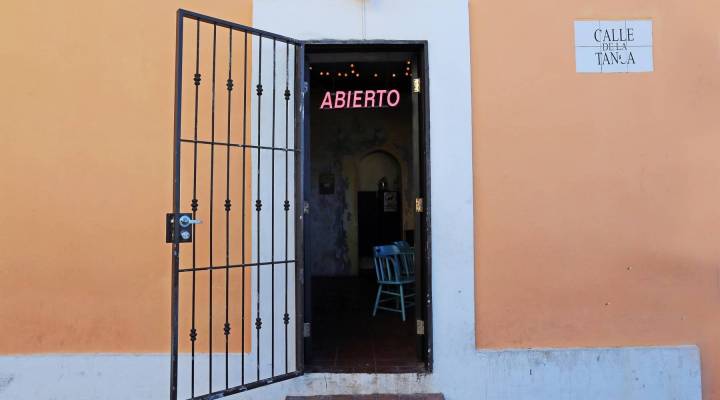 According to the Puerto Rican Federal Affairs Administration, roughly 1000 Puerto Rican families are moving to Florida every month. Things are pretty bad on the island right now, as the government tries to deal with billions of dollars of crushing debt. Unemployment’s at 12 percent and almost half of all families are living under the poverty line there. Cities like Orlando have had to rapidly respond to those families’ needs – and that means business and job opportunities.

But this isn’t the first massive migration from the island to the mainland. The so-called “great migration” of Puerto Ricans to New York City happened after World War II.

Carlos Vargas-Ramos, research associate at the Center for Puerto Rican Studies at Hunter College, said Puerto Ricans are moving to Florida these days because New York (with its city and state taxes) is too expensive. The impetus for moving to the mainland is still the same, though.

The big draw in this part of Central Florida is Disney World, an operation that always needs entry-level janitors and housekeepers. The money’s pretty good compared to what the same job earns workers on the island. And because Puerto Ricans are U.S. citizens, they don’t need green cards to work.

Those people moving here need a place to live. Some stay with family, others use motels, but some are looking to buy.

David Levis, CEO of a Puerto Rico-based mortgage lending company called Money House, said he decided to open an office in Kissimmee two years ago and now commutes between both places.

Florida locals are spotting the opportunity, too. Daisy Lopez-Cid owns a ReMax brokerage in downtown Kissimmee. She said she has realtors of many different backgrounds, and is always looking for more who know specific communities. Right now, the one to know is Puerto Rican.

Another place looking to hire Puerto Ricans isn’t as obvious as the housing sector: local government.

Mike Steigerwald is Kissimmee’s city manager. He says a lot of migrants are taking up long-term residence in motels and that, as a result, he’s having to deal with a type of homelessness that isn’t recognized by the federal government.

Mike Steigerwald, Kissimmee city manager, said he and his staff are looking for people who can relate to the culture and difficulty of getting acclimated. But finding Puerto Ricans to fill those positions can be a struggle.

“It’s very easy for me to diversify at the lower levels of our workforce,” he said. “But as we get up into the upper management positions into the leadership positions and more technical positions, it’s increasingly difficult because the language barrier is much more accentuated at that higher level position.”

He said the city’s feeling it in the education system, too. It’s not just individuals moving here to get work, it’s families. Those kids need bilingual teachers, which is creating yet another job opportunity in this little central Florida town of just over 60,000.

An American Migration: Puerto Ricans in Central Florida
Tags in this Story
Share this Story