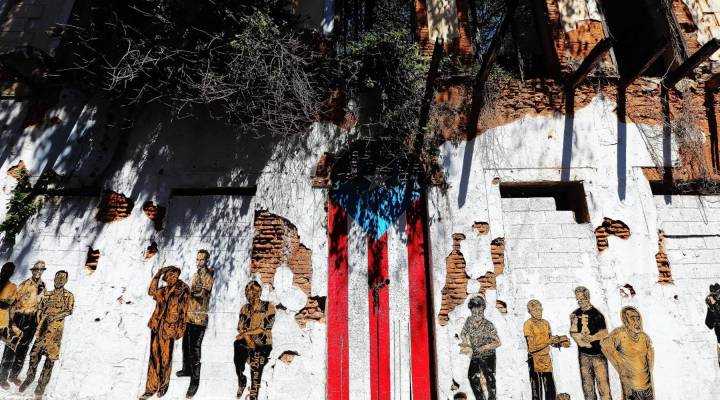 There’s a new, growing population of American citizens in Florida who might be able to vote for president for the first time – Puerto Ricans. And a lot of those leaving the island’s broken economy end up in Central Florida. Thousands of Puerto Ricans have settled over the past couple of decades in a town south of Orlando, near Disney World, called Kissimmee.

One of the main Puerto Rican hubs in the town is Melao Bakery. Wilfredo Ramirez stood outside most of the day asking people in Spanish if they’re registered to vote. It’s not normally the first thing a new acquaintance asks, but Wilfredo’s on a mission. He moved here from Puerto Rico a few months ago and has a job registering people. He said the electoral system on the mainland is tough for some new arrivals to figure out.

“It’s a bit confusing. Puerto Ricans are considered U.S. citizens, but it’s not the same as being born in the U.S.” mainland,  he said. “And that is the ultimate motive, for Puerto Ricans to register and give their vote.”

Melao Bakery is where many Puerto Rican migrants come to get traditional Puerto Rican food and chat with others from the island.

Puerto Ricans are U.S. citizens, but because of its territory status, those on the island can’t vote for president. Puerto Rico holds a presidential primary, but that’s where it ends. If they come to Florida and establish residency, though, Puerto Ricans can vote in November.

Wilfredo had been at the bakery for a couple of hours and had talked to more than 150 people. His contract will have him in Central Florida through November. The group he’s with, Hispanic Federation, isn’t affiliated with any party but has been vocal about Donald Trump’s immigration statements – calling them “misleading, demeaning and unfounded.”

But unlike in Florida, the island’s dominant parties aren’t Democrats and Republicans, and the main issue is whether Puerto Rico should stay a territory, become a state, or assert independence.

Carlos Vargas-Ramos is a researcher at the Center for Puerto Rican Studies at Hunter College. He said the Puerto Rican migration to Florida wouldn’t affect the election if groups weren’t out there explaining what’s happening.

“In general, were it anywhere else, where there’s not a mobilization effort, those Puerto Ricans would be less likely to turn out to vote,” he said. “But because, precisely, they’re going to be targets, they will be in play.”

The presidential campaigns know that. Florida is a battleground state, and apart from spending on TV, the Clinton campaign has been focused on trying to get people registered to vote. What they’re finding is that recent migrants aren’t necessarily as Democratic as once assumed.

“The big thing is, they’re not coming all Democrats, most of them come over and sign as no party affiliation,” he said. “So they’re not, specifically tied to the Democratic party.”

That could make it a little more difficult for Democrats and Republicans to directly identify supporters. Which means it’ll probably be more expensive to get those independent voters to pick a side.

But in this part of Central Florida the community’s biggest concerns are extremely local. Newly arrived Puerto Ricans need teachers in the schools who can help their children transition to living on the mainland. That means, teachers who are bilingual.

Pablo Caceres, director of the Puerto Rican Federal Affairs Administration, a Puerto Rican governmental arm with an office in Kissimmee, said that’s what he hears all the time.

“The issues that are most important for us, the Puerto Rican community, that we need to obviously start talking about is having good quality education for our kids,” he said. “And there are also other big issues like immigration.”

At the same time, a lot of Puerto Ricans left the island and came to Florida because things were so bad. Unemployment is twice that of the mainland, almost half the population is living under the poverty line, hospitals have to limit hours because they can’t pay for electricity and schools are closing because teachers aren’t getting paid.

Now some migrants feel like they might have an impact on what Washington does about their home’s crippling debt crisis.

Jose Rivera is an engineer who works as an office manager for his wife’s cardiology practice in Kissimmee.

Jose Rivera moved here from the island in 1994. He’s an engineer in favor of independence.

“It’s about time we own our own destiny,” he said. “We are the 32-year-old guy that still lives with mom and dad and we’re expecting mom and dad to fix all our broken plates.”

Independence would come with a complete financial break from the federal government and a complete rethinking of the economy of the island.