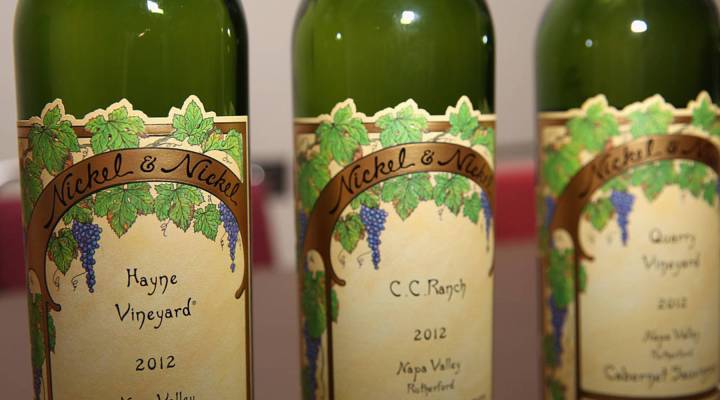 COPY
A loophole in federal regulations allows a winemaker to label its bottles "Napa Valley” as long as the grapes came from Napa and the wine is sold only within the winemaker’s state.  Jacqueline Romano/Getty Images for SOBEWFF

A loophole in federal regulations allows a winemaker to label its bottles "Napa Valley” as long as the grapes came from Napa and the wine is sold only within the winemaker’s state.  Jacqueline Romano/Getty Images for SOBEWFF
Listen Now

About 18 months ago, Rex Stults at Napa Valley Vintners learned something he found worrisome.

“It was brought to our attention that a winemaker, far from the state of California, somewhere in the South, was importing grapes from here and putting Napa Valley on the label of those wines,” said Stults, the trade group’s government affairs director. “We didn’t know that was permissible.”

A loophole in federal regulations allows a winemaker to label its bottles “Napa Valley,” say, as long as the grapes came from Napa and the wine is sold only within the winemaker’s state.

However, Stults said his group succeeded in ordering the out-of-state winemaker’s product online. It arrived at the group’s lobbyist’s office, far from the winemaker’s state.

“We thought the loophole in the law was hogwash, and then we found out that the winemaker exploiting the loophole law wasn’t even following the rules that allowed it,” he said.

At stake is the feeling that winemakers in prestigious wine regions have exclusive rights to tout the origin of their product.

With pressure from California lawmakers, the Alcohol and Tobacco Tax and Trade Bureau put forward a proposal that would close the loophole. Some groups asked the bureau to extend a period of public comment on the matter. The bureau said this week it will now take comments until early December.

Rob Wilson opposes closing the loophole. He co-owns Times Ten Cellars, which has wineries in Dallas and Fort Worth, Texas. Wilson sometimes contracts with out-of-state vineyards and wants to label the wine accordingly, especially since the Napa Valley label does have extra appeal to customers.

“We have one vineyard we work with in Napa Valley,” he said. “So we put the Napa Valley appellation on there. It’s true to where the grapes come from.”

It’s unclear if growers who contract with wineries like Times Ten Cellars would be harmed if the loophole gets closed.

“We’ve heard from growers who say, ‘Hey, these shipments of fresh wine grapes are very important to us, and our customers are going to be hurt,’” said John Aguirre, president of the California Association of Wine Grape Growers.

Aguirre said other growers don’t want their brand diluted by out-of-state wineries. The trade group hasn’t taken a position on the rule revision. Aguirre said he’s asked federal regulators for more information on how widespread use of the labeling loophole is, as it’s not a statistic his group tracks.