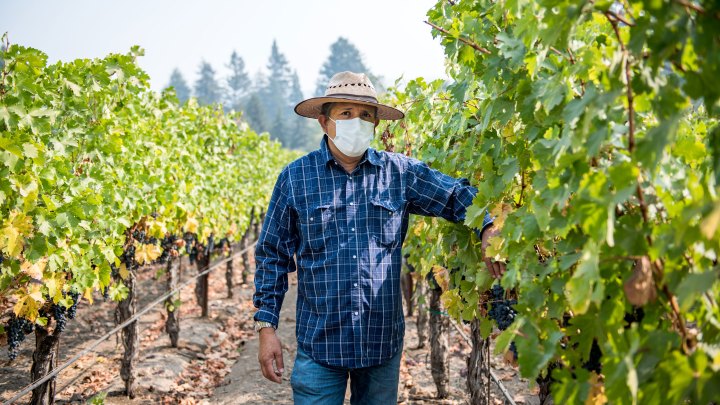 COPY
“It was difficult this year, and it’s going to be even harder next year,” says Enrique Lopez, who employs up to 100 people to harvest grapes. Beth LaBerge/KQED

“It was difficult this year, and it’s going to be even harder next year,” says Enrique Lopez, who employs up to 100 people to harvest grapes. Beth LaBerge/KQED
Listen Now

It’s been a terrible year for California’s wine industry, and it is continuing to get worse.

The year started off with a glut of grapes in the market that was hurting the price of wine. Then COVID-19 cut wine sales drastically and sickened workers. And now there are the fires.

Wildfires have already damaged or destroyed property at more than a dozen wineries in Napa and Sonoma. And countless acres of grapes are facing the possibility of smoke damage, which means they may never be turned into wine.

Guillermo Herrera and his wife, Angelica, run the Herencia del Valle company in Napa Valley. Here’s how Herrera summed up the year: “It’s just one thing after another. 2020 is the worst thing I’ve seen in my life, and I’ve been doing this for 20 years.”

Herrera runs a crew of up to 100 workers to manage vineyards for other wineries. His workers were recently loading up boxes to harvest grapes that growers wanted to try and pick before they got too much exposure to smoke.

“Smoke taint,” as it is called in the industry, can ruin wine. And with about 4 million acres already burned in the state this year, there has been a lot of smoke hanging around the vines. This is endangering the livelihood of the workers who harvest and make wine, some 65,000 people in the state, according to the Wine Institute, a California-based advocacy group.

Because of the threat of smoke taint, many winemakers are refusing to buy grapes from growers. If winemakers grow their own grapes, many are opting to leave them on the vine in hope of collecting insurance money if the grapes are found to have smoke taint. All this means people doing the harvesting are out of work.

“I’m getting calls left and right, day in day out, of folks looking to work,” Herrera said. “Five or six of my clients aren’t going to pick any of their fruit this year. Zero.”

John Aguirre, president of the California Association of Winegrape Growers, said it is unfortunate that winemakers are deciding not to take grapes because that puts all of the liability on the growers. He said growers and winemakers should work out a deal to make the wine and split liability costs if it turns out the wine is tainted.

This is especially true, Aguirre said, because the smoke damage may be far more limited than people fear. Depending on conditions like weather and days until harvest, many grapes hit by smoke might not affect the final product.

“In the vast majority of cases, these grapes will make great wine,” Aguirre said.

Grapes can be tested for smoke taint, but Aguirre said it can take 30 days to get results.

“There isn’t the ability to do testing and get results on a real-time basis to make decisions,” Aguirre said.

COVID-19 was already having a major impact on the industry. An analysis by Aguirre’s association calculates the pandemic has already caused $400 million in losses for a grape crop that’s usually worth $4 billion.

The association estimates the smoke could do just as much damage, or even more.

“It was difficult this year, and it’s going to be even harder next year,” said Enrique Lopez, who has a wine brand called Encanto Vineyards based in St. Helena. He also employs up to 100 people to harvest grapes.

COVID-19 impacted Lopez and his crew directly this spring. First a supervisor got sick with it in April. Then a foreman. And finally two crews from out of town tested positive. Lopez said he pays workers to quarantine if they feel sick.

In August, the coronavirus hit even closer to home. His own family started to become ill. First his wife. Then his baby, who was 9 months old. And finally his mother-in-law and himself. They all tested positive for COVID-19. They all recovered.

The workers who are out in the field now have to wear masks both for the smoke and a deadly virus that attacks the respiratory system. Even though conditions outside are dangerous, Herrera of Herencia del Valle said the workers have no choice if they want to make an income.

Many of the workers harvesting and making wine are people of color or immigrants. Some in the industry are undocumented and are blocked from access to unemployment benefits or any pandemic relief money.

Herrera said his priority right now is to make sure his employees have work. He’s taking jobs at lower pay for growers without insurance policies who are hoping to salvage their grapes before the chance of any more smoke damage.

“We have to make sure that our crop is saved and that we can continue to work that crop so we can eat and we can feed our families,” Herrera said.