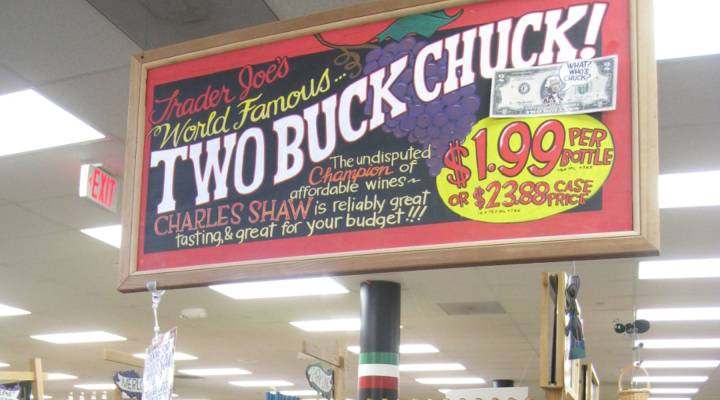 When Trader Joe’s introduced Charles Shaw wine in 2002, it sold for $1.99 a bottle. The price of “Two Buck Chuck” has since risen, but the nickname endures. Journalist Natalie O’Neill went in search of the original Charles Shaw for an article in Thrillist on the history of Trader Joe’s wine. She talked with Marketplace host Kai Ryssdal about what she learned. The following is an edited transcript of their conversation.

Kai Ryssdal: Tell me who the Chuck, the Charles Shaw of “Two Buck Chuck,” is. Because he’s a real person, right?

Natalie O’Neill: He is! Two Buck Chuck is a guy who back in the early ’70s became obsessed with wine, bought a bunch of property in Napa, built a winery and used to make, actually, really good, high-quality French-style Burgundies.

Ryssdal: And you say “used to make,” because his business was not kind to him and he went broke, right?

O’Neill: He did, yeah. He made a bunch of money. He made millions and then lost everything.

Ryssdal: So then, how do we wind up with Charles Shaw wines in Trader Joe’s for what I think is now technically $2.49?

O’Neill: Yeah. Well it’s kind of a — it’s a tale. He made everything, lost it all, and then a wine mogul named Fred Franzia, who some people might know from Franzia boxed wine, but he now owns a big company called Bronco wines, sort of swooped in and bought the trademark for just $27,000 back in 1995 and completely rebranded it as this budget wine.

Ryssdal: How does Fred Franzia and Bronco wines, I mean, what do they know that the rest of the wine industry doesn’t know? How do they make it so cheap and yet maintain, you know, a semblance of a drinkability?

O’Neill: If you look at a bottle of Charles Shaw wine, it says on the label, “Bottled in Napa Valley,” which has a certain prestige to it, but in reality he’s getting the grapes from the Central Valley of California, which is a much less desirable place for grapes to grow.

Ryssdal: And thus cheaper right? I mean, the grapes out of the Central Valley are cheaper than Napa grapes.

O’Neill: Exactly. So it’s not untrue that it’s bottled in Napa. Because he has a facility out by the Napa airport where it’s bottled, but the grapes aren’t from Napa.

Ryssdal: Oh great, not “untrue.” There’s a great line, actually, from Fred Franzia. He says that this wine is “freeway aged.”

O’Neill: Yeah, which means it’s aged only on the way in the trucks from the Central Valley to Napa where the bottling facility is.

Ryssdal: Natalie O’Neill. She writes for Thrillist, most recently on Two Buck Chuck, which you can get a Trader Joe’s for $2.49 here in California. Natalie, thanks a lot.