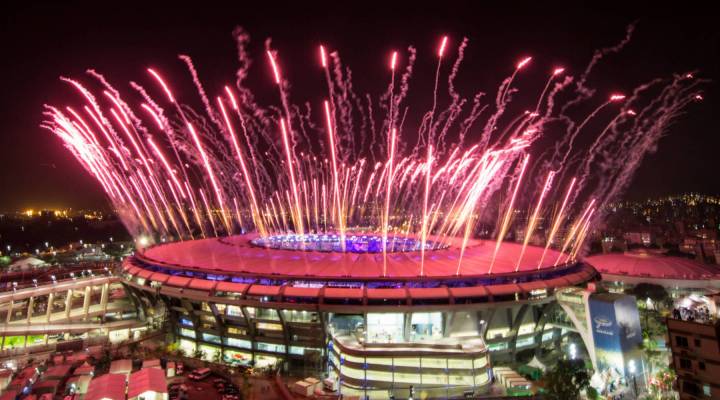 COPY
Fireworks explode over the Maracana Stadium during the opening ceremony of the Rio 2016 Olympic Games in Brazil. Chris McGrath/Getty Images

Fireworks explode over the Maracana Stadium during the opening ceremony of the Rio 2016 Olympic Games in Brazil. Chris McGrath/Getty Images
Listen Now

There were a lot of tweets over the weekend sarcastically asking why NBC was interrupting the commercials for the Olympics. Amanda Wright was one of the many people who said she wasn’t pleased with the number of ads she’s been watching at her home in Milwaukee.

“I feel like there are just so many commercial breaks,” she said.

But the number of commercials is actually down from four years ago. That’s not to say the ad buy was any less impressive. NBC said it sold more than $1.2 billion worth for this year’s games. The network acknowledged the Twitter storm, but blamed the complaints on people getting used to binge watching entire series, commercial free.

Matthew Quint, director at the Center on Global Brand Leadership at Columbia Business School, said NBC’s not likely to change anything because a billion dollars matters more to them than your tweets.

“You’re going to need advertisers choosing to spurn spending on the Olympics to create a major change,” he said.

Could that spending cut happen? Maybe. Ratings are down in Rio. So, when the games are in Tokyo four years from now, viewers might have fewer commercials to tweet their complaints about.