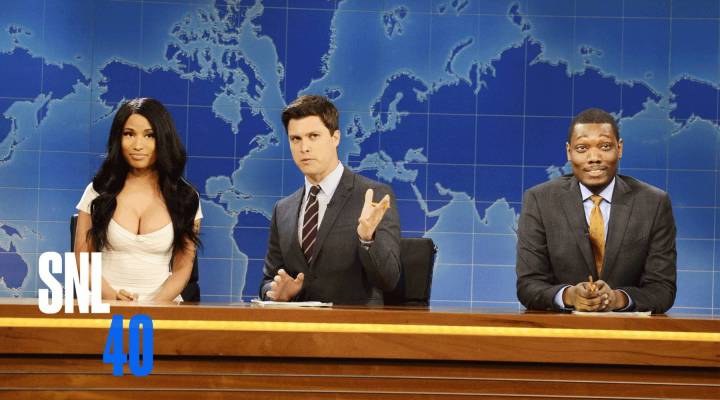 It’s going to get a bit more pleasant to sit through Saturday Night Live — when it actually airs live next season. NBC Universal, which produces SNL, has announced that it will cut 30 percent of commercial ad time out of the show. That’s equivalent to there being two fewer commercial breaks in the hour, according to Advertising Age.

NBC will also expand the airing of “original sponsored content” on SNL. Those are brand messages created jointly by SNL and its advertisers. NBC did not provide additional information about this sponsored content by Marketplace’s deadline. Traditionally, such content has included a show’s actors and characters appearing in the sponsors’ ads, as well as sponsors’ products and brands making cameo appearances, or being primary subjects, in show sketches, storylines, etc.

Previous examples of such sponsored content include stand-alone ads featuring SNL actors Cecily Strong and Michael Che in an ad for Jeep, and the characters Hans and Franz in an ad for State Farm Insurance.

NBC is trying to hold on to SNL’s highly desirable young viewers and maintain its ratings, which have been flat.

“It’s definitely a move toward recognizing advertising clutter in network television,” said analyst Jack Myers, chairman of Media Village and author most recently of “The Future of Men.”

Myers said over-the-air TV and cable networks are struggling to deliver their viewers to advertisers, as those viewers have ever-more ways to avoid watching the ads that pay for the programming.

“Young viewers, especially, are more likely to view shows on Hulu, Amazon, iTunes, or on a DVR after the fact,” said Myers. “So it’s a way of holding the viewers—both in real time, and for longer viewing periods. You don’t lose them in the commercial breaks.”

Fewer commercials and commercial breaks — a trend also being seen at other networks, including Viacom and Turner — can mean less ad revenue. Tuna Amobi, equity analyst covering media companies at S&P Global Market Intelligence, said he believes NBC “has done some math” to justify such a large reduction in conventional on-air advertising on SNL.

Amobi said that SNL’s expansion of sponsored content on air is another way NBC can add value and target messages more precisely for its prime advertisers.

“I think it’s kind of ironic,” said Taplin. “Parodies of advertising have played a large role in SNL. And now SNL will use its characters to actually be in advertising. Going back many years, I can’t imagine that John Belushi would have been willing to be in an ad. All these kids on SNL now have a certain amount of credibility. They have to be a little careful they don’t just become sell-outs.”

Jack Myers said that such sponsored content can work well with younger viewers. “Young people are uniquely receptive to advertising when it’s creative,” he said.

Jonathan Taplin said advertisers hope to gain cred with viewers by crossing the traditional line between sponsor and show-producer. “Brands might think, ‘We’re in on the joke, so people will watch our ads instead of fast-forwarding.”