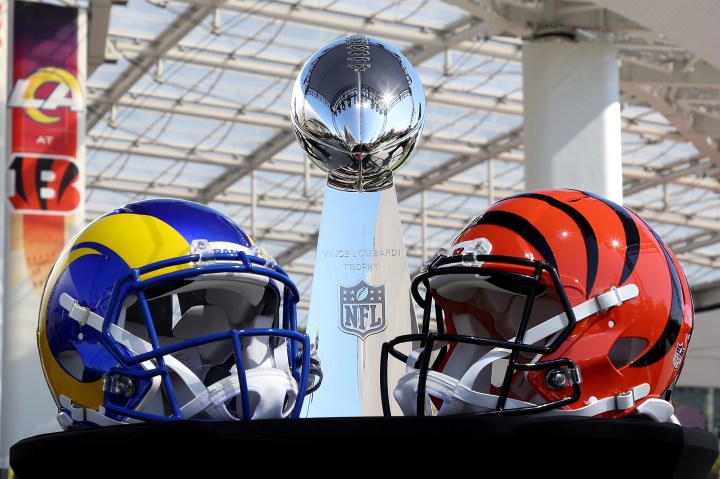 The Los Angeles Rams and Cincinnati Bengals will compete in Sunday's Super Bowl, and advertisers will compete for viewers' attention. Rob Carr/Getty Images

The Los Angeles Rams and Cincinnati Bengals will compete in Sunday's Super Bowl, and advertisers will compete for viewers' attention. Rob Carr/Getty Images

As viewers watch the Cincinnati Bengals and Los Angeles Rams face off in Sunday’s Super Bowl, they can expect commercials that feature the metaverse, electric vehicles and appearances by celebrities like Zendaya.

NBCUniversal has sold all of its ad slots, with some 30-second spots going for a record $7 million.

Charles Taylor, a marketing professor at Villanova University, said we’re going to see fewer ads that take a serious tone or make emotional appeals. That’s in response to “how worn out the country is” by the COVID-19 crisis, he said.

Instead, brands will try to rely on humor and movie stars. Along with Zendaya, who will be in an ad from the website builder Squarespace, Gwyneth Paltrow will be in an Uber Eats spot and Ewan McGregor will promote Expedia.

“In all the time I’ve been studying the Super Bowl ads, I’ve never seen so many celebrities,” Taylor said.

The similar ads will make it harder for companies to stand out, he said, but advertisers are hiring A-listers because of their large followings and the publicity they’ll generate.

Taylor said Super Bowl commercials can be worth their high cost, providing advertisers with even bigger returns than they pay for. “But it’s got to be a good ad. They need to have clear objectives that they want to achieve.”

He added that TV ratings for events like the Olympics, Grammys and Academy Awards have declined, while the Super Bowl still reaches a wide swath of people. Although the game’s ratings dropped last year, its streaming numbers were high and Variety Intelligence Platform expects ratings to rebound this year.

In 2021, there were 96.4 million television viewers and an average of 5.7 million viewers per minute through livestreaming.

Less traditional products will be advertised

NBC said that 40% of the advertisers that signed up for the game, about 30 companies, are doing it for the first time. Some are cryptocurrency companies, like FTX and Crypto.com.

These companies are trying to show that they’re legitimate businesses, explained Spencer Ross, an assistant professor of marketing, entrepreneurship and innovation at the University of Massachusetts, Lowell.

Crypto companies have been shelling out big bucks on sports advertising. In a $700 million deal late last year, Crypto.com generated bemusement after buying the naming rights to Los Angeles’ Staples Center (which, yes, will now be named Crypto.com Arena). Several crypto and fintech firms are also paying to have their logos featured on NBA players’ jerseys as part of the league’s patch partnership program.

And you can expect references to the metaverse, a shared online world, in ads for Meta (which owns Facebook) and Bud Light.

Ross added that there will also be several commercials featuring electric vehicles, which the publication Barron’s said shows that the auto industry “is planning for an all-electric future.”

But it’s not for everyone

Some former advertisers are sitting out the Super Bowl this year, including Tide, Mars Wrigley and State Farm, according to reports from Adweek and AdAge.

Adweek said State Farm is opting instead to advertise on TikTok, using the hashtag #TeamStateFarm and asking users “to show off their talents (no football skills required)” with the app’s duet feature.

While Ross said traditional advertising is still valuable, looking ahead, those types of ads might not have the same value they had in the past as younger consumers watch media on less traditional platforms.

“There are generational splits with the way that advertisers are allocating their money on different social media platforms,” Ross said. “My students are much more interested in watching shorter clips. And so those are the kinds of things that advertisers certainly are being cognizant of as they’re reaching the Gen Z audience.”