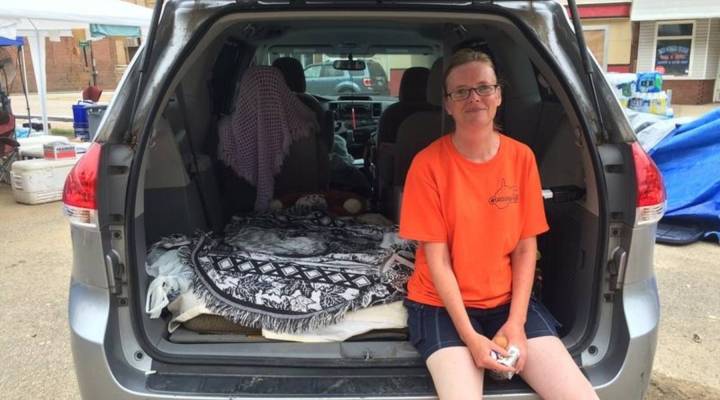 COPY
Lerry Linger, a resident of Martinsburg, W. Va. sits by her bed in the van she's been sleeping in as she volunteers at a donation station in Clendenin. Anne Li

Lerry Linger, a resident of Martinsburg, W. Va. sits by her bed in the van she's been sleeping in as she volunteers at a donation station in Clendenin. Anne Li
Listen Now

The National Flood Insurance Program is  facing scrutiny after the New York Attorney General’s office raised questions about its accountability in the aftermath of Hurricane Sandy. But many properties across the U.S. aren’t even covered by flood insurance in the first place. According to the Federal Emergency Management Agency, of the roughly 5 million properties in  flood hazard areas nationwide, less than a third are insured by the NFIP.

Why? Because many don’t believe that their risk is that great.

In late June, flooding killed 23 people in West Virginia. The state’s hilly terrain makes it perfect for inland flooding. Clendenin, W. Va., is a small town nestled between a river and a tall hill. When the floods hit, rainwater not only rose up from the river — it rushed down the hill, topping at 33 feet.

A home stands open to the elements near downtown White Sulphur Springs, W.Va. The house was damaged during the June 2016 floods.

“Where we’re standing right now – if you look to your right, there’s the water line,” said Kerry Linger, a volunteer in Clendenin. “If we were standing here when the flood happened, we would’ve been washed away. It’s over our head.”

Flooding is the most frequent and most expensive natural disaster. Despite that, some victims said they don’t need flood insurance because what happened this time was a “thousand-year flood,” – one that has a 0.1 percent chance of happening each year.

Steven Kite, a geology professor at West Virginia University, explained why that phrase can be misleading, using a “hundred-year flood” as an example.

“A 100-year flood has a one percent chance of occurring in a given year if the past is the key to the future,” said Steven Kite, a geology professor at West Virginia University. “But as watersheds change due to land use or climate change, then what in the past may in the future become even more frequent than that.”

White Sulphur Springs was one of the West Virginia towns hardest hit by the June 2016 floods.

Others say that flood insurance simply isn’t affordable. FEMA says that on average, American homeowners pay about $700 a year for flood insurance premiums. But the NFIP is $24 billion in debt in part because it tried to keep costs low for property owners. The cost of premiums couldn’t cover disasters like Hurricane Sandy or Katrina. Because hurricanes cost so much, even less money is available to cover the inland flooding that happens in West Virginia. But plans to gradually raise premium rates are in place. For now, FEMA has awarded a total of $72 million in federal assistance to the victims of one of the deadliest floods in West Virginia history.