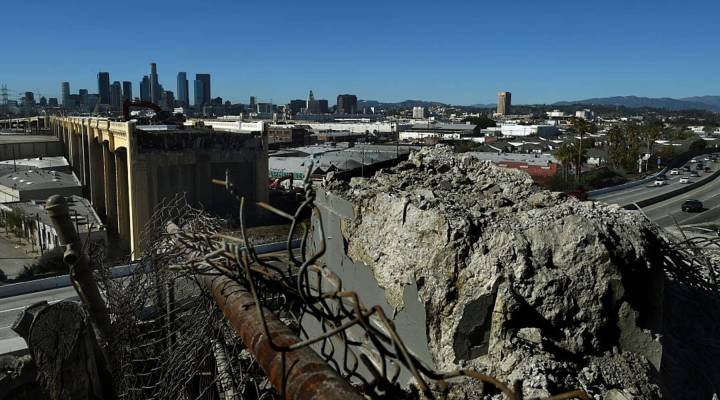 COPY
The iconic 6th Street Bridge over the 101 freeway that connects downtown Los Angeles with its eastern disticts is seen after the start of demolition. The bridge was demolished due to safety concerns after its concrete has become weakened by a rare chemical reaction. MARK RALSTON/AFP/Getty Images

The iconic 6th Street Bridge over the 101 freeway that connects downtown Los Angeles with its eastern disticts is seen after the start of demolition. The bridge was demolished due to safety concerns after its concrete has become weakened by a rare chemical reaction. MARK RALSTON/AFP/Getty Images
Listen Now

Japan announced today that it’s going to try and kick-start its economy with a huge stimulus program, that includes a lot of spending on public works. Here in the U.S., as we reported last week,  our economy is slogging along, with the latest projections for annual growth at about 1.2 percent. So, could spending on infrastructure in the  U.S. be the answer here if this lackluster economy continues into the next administration? Donald Trump and Hillary Clinton both seem to think so.

They are both all about spending. Take Democratic nominee Hillary Clinton. As early as the primary, she proposed spending $275 billion over five years to help create jobs, among other things. “And she looks at a world where we have record low interest rates, and lots and lots of opportunity in terms of infrastructure,” Kent Hughes, public policy fellow at the Wilson Center said.

“Opportunity” is putting it mildly. One report from the American Society of Civil Engineers said our bridges and parks are in such bad shape, it’d take $3.6 trillion to get them up to date by the year 2020. Republican nominee Donald Trump told Fox Business News Clinton’s proposed $275 billion isn’t enough.

“Well I would say at least double her numbers, and you’re gonna really need more than that,” Trump said.

That is not at all in line with fiscal conservatives, said Kevin Esterling, who teaches political science at UC Riverside said. But he said this is Trump we’re talking about. “I think it’s just consistent with who he is, what he knows,” Esterling said. “He builds things. Right? He wants to build a wall. That’s like a major infrastructure expenditure right there.”

So if the next president has to deal with a sluggish GDP growing at about 1.2 percent, is spending money on infrastructure the answer?

“I mean it might be the answer just based on long-run growth,” Harvard economics Professor Gabriel Chodorow-Reich said. He said that spending can boost employment and productivity.  But on the flip side, he said, it makes the fed more likely to raise interest rates. Which might put a damper on things in the short term.