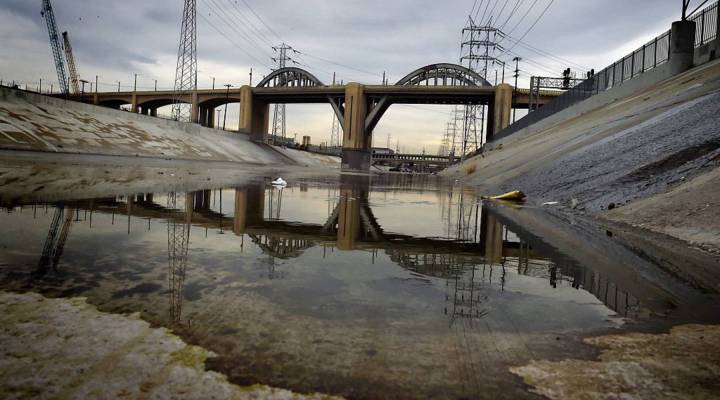 COPY
The iconic Sixth Street Bridge wasn't safe. Construction on the new bridge is expected to bring hundreds of jobs to the area. MARK RALSTON/AFP/Getty Images

A month passed, then two, and Gomez said he needed to “get off [his] butt and just go to work again.”

Luckily, he didn’t need to go far. A huge project to rebuild the Sixth Street Viaduct in Los Angeles was just getting started.

The iconic bridge with its swooping steel arches has played a supporting role in more than 1,500 movies and commercials, including “Grease,” “Terminator 2” and “Furious 7.”

The bridge — built in 1932 — was sick with a kind of concrete cancer and in danger of collapsing during a big earthquake. For months, Gomez has been working on its demolition.

“I’m blessed with this job. It’s like a long stretch over four years on this job site, so close to home,” Gomez said. “Can’t get any better than that, right?”

The new bridge will have bike lanes and a 12-acre park underneath it, said Gary Lee Moore, the city engineer for Los Angeles. With funding from the Federal High Transportation Administration and CALTrans, Moore said the $445 million project will put hundreds of people to work.

“It’s a lot of real jobs. For instance, a laborer’s hourly wage is in the low $30 range,” Moore said.

If there’s one thing presidential nominees Hillary Clinton and Donald Trump agreed on it’s that projects like this one can help boost the economy. They had both promised to invest billions of federal dollars to upgrade the nation’s aging infrastructure and create jobs.

Along with laborers, LA’s project would employ workers ranging from steel producers and LED designers to structural engineers and environmental consultants.

Then, there are the “induced jobs” the project will spur, said Joseph Kane, a researcher at Brookings Institution.

Those jobs are a result of workers spending their paychecks. It can include extra staff for nearby restaurants “or the barber who could be cutting the construction worker’s hair,” Kane explained.

According to a report from Standard & Poor’s, a $1.3 billion investment in infrastructure can pump $2 billion into the economy through jobs and a demand for services.

“When we construct a new bridge or subway line … these aren’t simply investments that pay off as short-term shovel-ready projects,” Kane said. “Those facilities are in operation for decades, if not centuries.”

But, of course, there are downsides. Construction and blocked roads hamper local business. Just two blocks from the Los Angeles site, Moses Aguilera said sales at his bodega have plunged.

Aguilera said he’s already had to cut his employees’ hours, and the project isn’t expected to be done until 2019.

“This is the beginning. We don’t know what’s going to happen in the future,” he said.

Construction worker Alberto Gomez knows what he wants for his future — enough work to finally be able move out of his mom’s house.