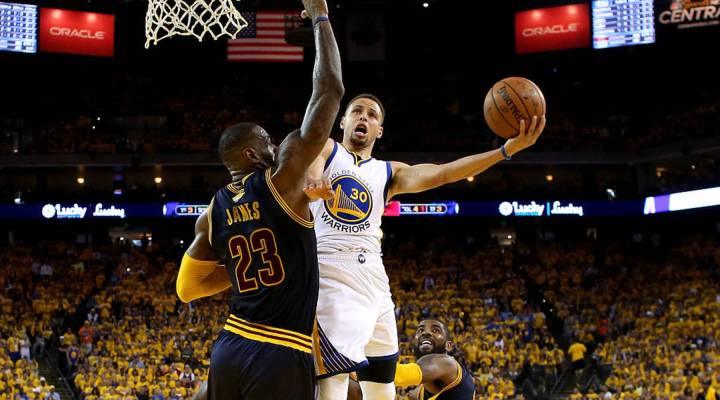 COPY
Stephen Curry #30 of the Golden State Warriors goes up for a shot against LeBron James #23 of the Cleveland Cavaliers in the first half in Game 2 of the 2016 NBA Finals at ORACLE Arena on June 5, 2016 in Oakland, California.  Ezra Shaw/Getty Images

Stephen Curry #30 of the Golden State Warriors goes up for a shot against LeBron James #23 of the Cleveland Cavaliers in the first half in Game 2 of the 2016 NBA Finals at ORACLE Arena on June 5, 2016 in Oakland, California.  Ezra Shaw/Getty Images
Listen Now

Everyone in the sports world is pretty excited about the possibility of the Golden State Warriors closing out consecutive NBA Championships. The players for both teams have to be tired – they’ve been playing games since last October. But the more games players play, the more money you make, right?

Not exactly. The way NBA contracts work, players sign a contract to get paid a certain amount each year. The regular season is 82 games. If a team makes the playoffs, that could mean another 28 games.

The way the NBA set it up, it put aside a lump sum to be split between all the teams that make the playoffs. This year – it’ll be about $15 million dollars.

Larry Coon, an expert on the NBA’s collective bargaining agreement and writer for ESPN.com, said a better way to put it is, it’s a bonus. He said the real winners in the playoffs are broadcasters and the NBA.

“Would the league love for every series to go seven games? Of course,” he said. “Then it’s raking in more advertising dollars.”

He said those advertising dollars certainly bring more money to the league and, eventually, players will see that money.

Fans don’t have to feel bad for players like LeBron James and Steph Curry if the series gets pushed to seven games. But they’re also not banking when that series goes the distance. At least, not immediately.