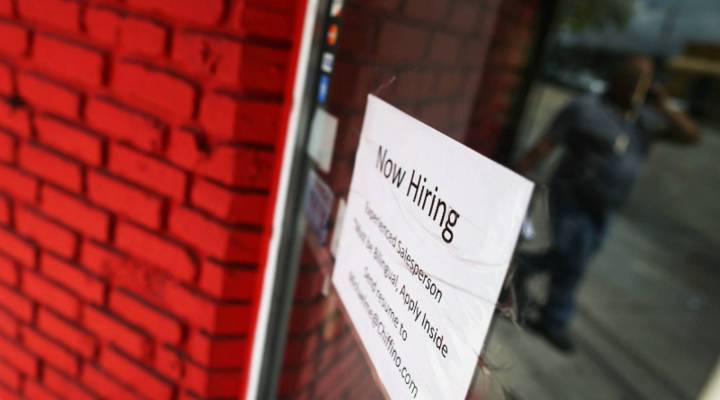 COPY
The May jobs report is one of the last major economic data points the Federal Reserve will look at before its meeting this month. Joe Raedle/Getty Images

The May jobs report is one of the last major economic data points the Federal Reserve will look at before its meeting this month. Joe Raedle/Getty Images
Listen Now

The economy added 38,000 nonfarm payroll jobs in May, with the unemployment rate dipping from April’s 5 percent to 4.7 percent, according to the Bureau of Labor Statistics.

That jobs number is much lower than anticipated — economists polled by the Wall Street Journal expected there to be an increase of 158,000 nonfarm payrolls.

Friday’s labor report is one of the last major economic data points the Federal Reserve is going to get before its June meeting.

“It will be a critical element in terms of the algebra that they take into play determining whether they will make their next move in June,” said Bill Northey, chief investment officer at US Bank Private Client Group.

But there’s no magic number of new jobs that’ll convince the Fed whether or not to raise interest rates.

The Fed is also going to be watching for “signs that slack in the labor market is disappearing,” said Gary Burtless, an economist at the Brookings Institution. “For example, declines in the unemployment rate, declines in the share of workers who are on part-time hours involuntarily.”

While the May jobs report reveals the unemployment rate fell, the number of involuntary part-time workers increased by 468,000, hitting 6.4 million.

The Fed is also, as always, going to keep part of its attention focused squarely on the inflation rate.