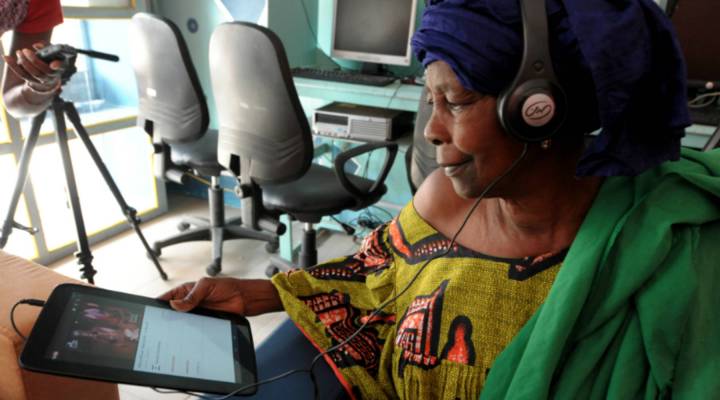 COPY
Digital tech is spurring development in sub-Saharan Africa, but there could also be some drawbacks. SEYLLOU/AFP/Getty Images

Digital tech is spurring development in sub-Saharan Africa, but there could also be some drawbacks. SEYLLOU/AFP/Getty Images
Listen Now

The 26th World Economic Forum on Africa is happening this week. It’s taking place in Kigali, Rwanda as sub-Saharan Africa faces its lowest growth in 15 years.  One way the forum is hoping to spur growth is to shift focus away from dependency on commodities and toward technology.

“The risks and opportunities [of technological development] are compounded in Africa,” he said. On the one hand, “you can gain so much from the digital revolution in terms of enabling new jobs; enabling entrepreneurs; enabling new, better, more cost-effective ways of putting in place the infrastructure the region so badly needs.”

“What we don’t know,” said Cann, “is whether they will be more than compensated by new job creation. So that’s a big risk.”

Charles Kenny, a senior fellow at the Center for Global Development, said digital technology has a big role to play in keeping sub-Saharan Africa on its path towards development, but countries should be cautious about how they invest their technology dollars.

“If countries are using money for rolling out fiber optic cable [for broadband], then they’re not using it to vaccinate kids or hire another teacher for the classroom,” said Kenny. “So there are real trade-offs there.”

He points to the successful use of smaller-scale technology making big impacts, like fishermen using mobile phones to determine the best places to dock in order to get top price for their catch.

Camilla Nestor is senior vice president for programs and regions with the Grameen Foundation, which works with the poor in developing countries. She sees technology as a tool for lifting people out of poverty.

Those kinds of programs help the poor, and a growing middle class means markets for higher-end tech are opening up as well.