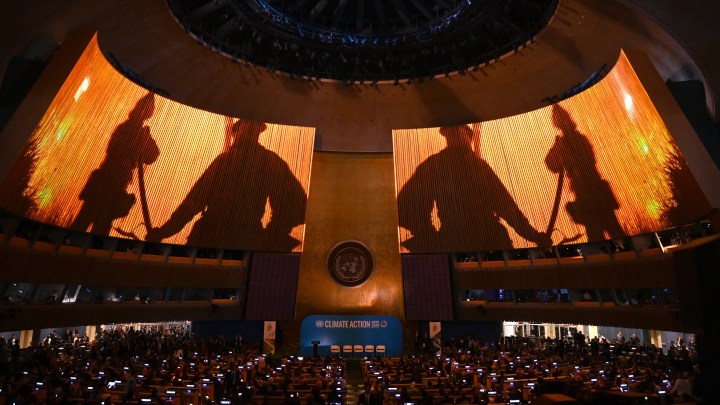 Global leaders appeared reluctant to make specific pledges after the United Nations Climate Action Summit in New York on Monday. The delegates were dressed down by 16-year-old climate activist Greta Thunberg, who called out world leaders’ focus on continuous economic growth while not prioritizing the issue of climate change.

In her speech, she referred to the idea of eternal economic growth as a “fairy tale.”

Is it a fantasy to stop climate change and for economies to grow at the same time? “Marketplace Morning Report” host David Brancaccio put that question to longtime environmental activist and writer Bill McKibben, who’s founder of 350.org, an organization long focused on getting the world to focus on rising temperatures with so much man-made climate gasses getting into the air.

David Brancaccio: What do you make of that reference, in [Greta Thunberg’s] speech to fairy tales of economic growth? Growth itself is an issue we have to address?

Bill McKibben: Well, of course, some of us have been talking about it for a long time. The emphasis of the 20th century was on constant growth. That came with some good things and it came with some really bad things. And we’re seeing those really bad things in stark evidence. Now, if you’re Greta, or someone her age looking at the planet, the first things you notice are that half the sea ice in the Arctic, it’s disappeared in the last 30 years; that the pH of the ocean has changed dramatically, it’s become 30% more acidic; that we’ve lost half the animals on this planet since 1970. That might lead you to conclude that our current set of arrangements isn’t working very well. And I think what she talking about is if the lens through which we looked at things in the 20th century was growth above all, the lens through which we look at things in the 21st is probably going to be survival above all.

Brancaccio: What about the phrase sustainable growth? Is that an oxymoron? Or is there such a thing?

McKibben: I don’t know. I guess we could find out if we tried. At the moment, we’re not. We’re continuing to increase the carbon emissions that we pour into the atmosphere. Our biggest banks and insurance companies and asset managers are continuing to lend vast sums of money into the fossil fuel industry. I think the place to start is to get rid of the fantasy that somehow economies regulate themselves, that corporations left to their own devices or markets left unregulated will somehow produce outcomes that we want.

Brancaccio: I want to ask you about this nettlesome paradox that economists have noted: Sometimes conservation efforts to save money, which is then used by consumers who then — or businesses — to spur more economic growth, which produces more greenhouse gases that make the problem worse. There’s not a virtuous cycle here sometimes.

McKibben: It’s very true. Economists and politicians sometimes think that the world is a subset of the economy. Listen to the language that people use. We talk about the ailing economy and the economy has caught a cold or whatever. I mean, look, you guys on days when the stock market goes up, you guys play happy music. And on days, when it goes down, you play a dirge. We have to really think about whether or not that’s working anymore.