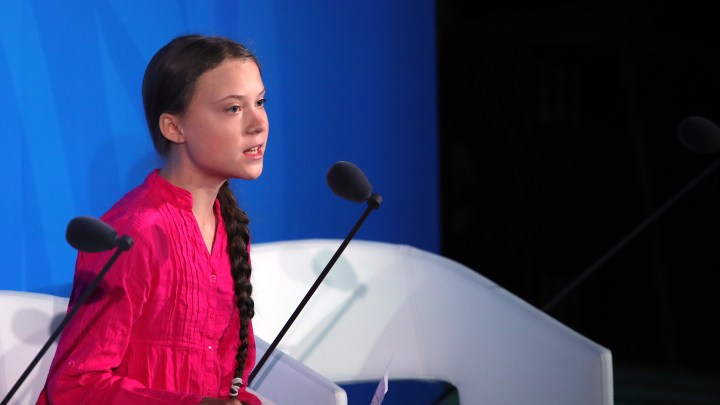 “We are in the beginning of a mass extinction,” said Greta Thunberg, the 16-year-old climate activist from Sweden, to the delegates at the start of the United Nations Climate Action Summit in New York. “And all you can talk about is the money and fairy tales of eternal economic growth. How dare you?”

Thunberg was the youngest person to take the stage. She wore a pink shirt, and had a long braid that went down her back. But her speech seemed to haunt the heads of state who spoke after her.

French President Emmanuel Macron called for action, saying that our young people can’t continue to spend their Fridays protesting climate change. “This isn’t about being self-satisfied.”

“We hear you, Greta Thunberg,” said Indonesian Vice President M. Jusuf Kalla. “Our house is crumbling. Indonesia is a case in point.”

Some of the business leaders attending the summit said that Thunberg’s words were right on the mark.

“Greta Thunberg calling it like it is, I think, was a pretty good wake up call to start today’s events,” said Jay Koh, with the private equity firm Lightsmith Group. “The urgency of the need for climate adaptation resilience is palpable.”

Koh’s firm is focused on adaptation technology, and he said that while the need for action is urgent, it also offers a chance to invest. “There are now opportunities to invest in technologies and solutions that can help deal with the effects [of climate change]. And that’s where I think there is a really interesting intersection of the Venn diagram.”

Koh points to technologies, such as drip irrigation, that may be widely used in one part of the world, and will increasingly be needed elsewhere, as those areas deal with a changing climate. “If you could find those companies, invest in them, help them to scale up their technologies, and especially deploy them as quickly as possible over vulnerable populations, then you have a chance at scaling the set of tools needed to deal with the problem, as the problem gets much bigger.”

The UN last held this kind of climate summit in 2014, in the lead up to the meetings that resulted in the Paris Agreement. That agreement lays out a goal of keeping global average temperature rise to well below 2 degrees Celsius from what it was during preindustrial times. The global temperature has already risen by 1 degree. A report last year from the Intergovernmental Panel on Climate Change describes the problems that an increase of 1.5 degrees will cause, including increased droughts, floods and heat waves.

While the problems are more tangible than they were during the last climate summit, the money to help deal with those problems seems to be getting more tangible as well. Barbara Buchner, who leads the climate finance program for the research nonprofit Climate Policy Initiative, said there was much more talk about climate finance at this summit than the one five years ago. Climate finance is, essentially, taking climate into account when making any kind of economic decision.

“You can see that is it has become kind of a key item on people’s agenda,” said Buchner, pointing to a commitment from an alliance of pension funds and insurers that it would shift its $2.4 trillion in assets to be carbon neutral by 2050.

Buchner said there’s also real opportunity in growing in a more sustainable way. She mentioned a report from the Global Commission on the Economy and Climate that said investing in low carbon economic growth could lead to $26 trillion in economic benefits by 2030.

“Renewable technologies are actually more competitive today than fossil fuels. It’s cheaper to invest in solar than it is to invest in coal, for example,” said Buchner. “But there is also the impact of being less dependent on energy imports from other countries, because you basically can become self-sustaining in your countries through renewable energy.”

But will there be enough investment fast enough for the kind of transformational thinking private equity investor Jay Koh says we need to keep the climate crisis escalating out of control?

“I’m seeing some of the edges of it,” said Koh. “That back and forth is the combination of experiences that will result in real progress. And I genuinely hope that it gets outside of the bubble that is this conversation right now here at the UN. And I think it will.”

If you ask Greta Thunberg, there has to.

“Right here, right now, is where we draw the line,” Thunberg said to the delegation. “The world is waking up.”