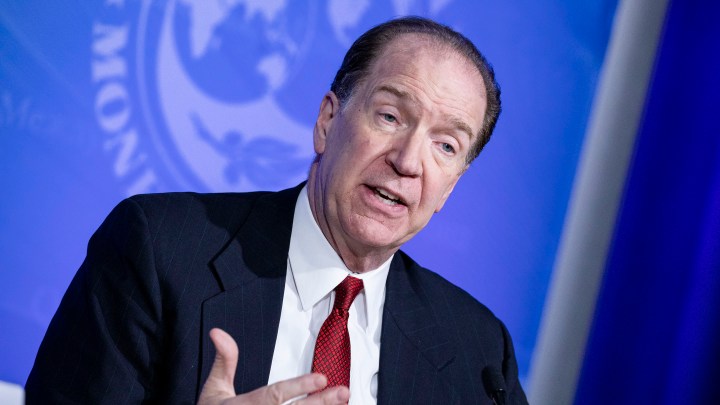 COPY
"If you only come back 4% this year [in growth for the world economy], you're not back to where you were, even at the end of 2021," World Bank President David Malpass said. Samuel Corum/Getty Images
COVID-19

"If you only come back 4% this year [in growth for the world economy], you're not back to where you were, even at the end of 2021," World Bank President David Malpass said. Samuel Corum/Getty Images
Listen Now

With the new year upon us, it’s time to look at the latest forecasts for what might happen to the world economy in 2021.

“Our outlook right now is that it’s more of a subdued recovery. You know, it’s a comeback from a bad year in 2020, but not strong enough for my taste,” Malpass said. “One key variable is vaccines. If they can be deployed really fast, including to the developing world. that would improve it and maybe turn us into a [V-shaped recovery].”

David Brancaccio: Now you’re thinking the global economy could expand 4% this year? But that’s what, if things stay on track for vaccine distribution?

David Malpass: Yeah, that assumes vaccine distribution is widespread. But that assumes that most of it comes in the second half of 2021. The reality is, it’s taking a while for people to actually administer the vaccines, and that’s especially true for the poorer countries. But it’s also a concern, because last year was -4.3%. So if you only come back 4% this year, you’re not back to where you were, even at the end of 2021.

Brancaccio: Now, in the developed world, that there’s been an extraordinary amount of borrowing to deal with the emergency that’s upon us. But also there’s borrowing in emerging markets in the poorest countries as well. A lot of debt moving forward can be a problem.

Malpass: It can be a problem. And there’s already this massive inequality, in that the advanced economies have been able to buy assets of higher-income people — corporate bonds, for example, municipal bonds — but for the developing world, that hasn’t really been possible. What they are doing is running bigger deficits and adding to debt. But I think the bigger problem was they already had a lot of debt prior to the pandemic. So what we’re working on is trying to reduce that debt substantially in 2021.

Brancaccio: Well, at least interest rates are low. Can’t that help the developing world as they try to borrow?

Malpass: It does provide some opportunity for them. But the question is, how much investment do they actually get from the savers in the advanced economies? And one of the problems is they’re mostly buying their own assets. They buy mortgage-backed securities, or they buy government bonds. And, to make matters a little bit worse, the advanced economies are financing their purchases with short-term financing. For example, Treasury bills are one source of financing for the U.S. government. And the Federal Reserve borrows from banks heavily. And that takes money away from what could be invested into the developing world. So the reality is we’re not seeing nearly enough investment in the developing world, even though interest rates are low in the advanced economies.

Sustainable growth in the context of climate change

Brancaccio: We’re talking growth here, but it’d be nice if the growth, even though we’re recovering from an emergency, would be sustainable growth, because the pandemic is not the only big problem out there. One also thinks of climate change.

Malpass: That’s right. As we think of the concept of development, we want people to do better, including in the poorer countries — in fact, especially in the poorer countries. And that means better in all respects. That means health care, education, nonviolence and addressing of climate change for the poorest countries. That means adapting to the changes that are going on in the climate. That might mean not as many people living in coastal areas, or if they are, that there’s some protection from tides, from storms, from climate in general. And so we work hard on that.

The World Bank is a broad development institution. So one of the goals is to reduce poverty, but many other goals are to improve the actual living standards of people that might not be in extreme poverty, but they’re, they’re poor by global standards, and they would like to do much better. And so what we’re trying to do is help with infrastructure, with targeted climate responses. The World Bank is the biggest international funder of climate financing. And so that helps countries with the infrastructure and with the changes that they need in their economies, and maybe that they’ve committed to under their agreements with the Paris accords.