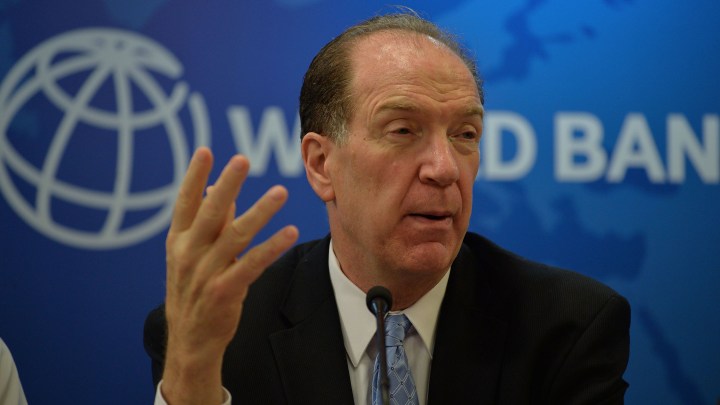 COPY
"Up to $12 billion is a signal to the pharmaceutical manufacturers that there's going to be a big demand, and that there's financing for it, and that the countries will be looking for a safe vaccine. And so it fills that void that would otherwise be there," says World Bank President David Malpass. Sajjad Hussain/AFP via Getty Images
Fast-Track Vaccines

"Up to $12 billion is a signal to the pharmaceutical manufacturers that there's going to be a big demand, and that there's financing for it, and that the countries will be looking for a safe vaccine. And so it fills that void that would otherwise be there," says World Bank President David Malpass. Sajjad Hussain/AFP via Getty Images
Listen Now

The World Bank is seeking approval from its board for a $12 billion fund that would help poor and developing countries get access to a COVID-19 vaccine in the future.

“Marketplace Morning Report” host David Brancaccio spoke with World Bank President David Malpass about how the fund would work and how the global financial institution is uniquely positioned to help facilitate a future international distribution plan for the COVID-19 vaccine. The following is an edited transcript of their conversation.

David Brancaccio: So this request for $12 billion, what is the problem that money would try to fix?

David Malpass: The developing countries and especially the poorest ones simply don’t have resources to put in a marker. And so up to $12 billion is a signal to the pharmaceutical manufacturers that there’s going to be a big demand, and that there’s financing for it, and that the countries will be looking for a safe vaccine. And so it fills that void that would otherwise be there.

Money “in hand” for vaccine manufacturers

Brancaccio: In other words, laying down some money, so that the pharmaceutical companies are aware that there is demand, even in countries that are middle income and lower income.

Malpass: That’s exactly right. And importantly in this, you know, paperwork matters. It’s hard, but there has to be some kind of purchase order or a contract. So what we had done in March and April, the World Bank set up very quickly, a set of capabilities so that we could make grants to countries and see that they were buying health equipment, for example, masks. That process has worked really well. People have recognized that it’s fast. We don’t have to have each individual transaction go through our board. It’s an authorization for necessary health equipment for the emergency. And so now we’re extending that for vaccines, because those will be so important to getting countries back on track.

Brancaccio: Now this is — let me try an analogy on you. I hope it’s not crass. It’s a bit like when people are bidding on a new home, people with cash in hand to put down a deposit might find their bid more likely to be accepted. The World Bank is trying to give countries the money to be able to be taken seriously when it comes to getting their dibs in for these vaccines?

Malpass: That’s right, to be clear the financing wouldn’t move to the country until they’ve established what it is they want to buy and from whom. So for example, we need though the global system to recognize there’s going to have to be a technique to vaccinate people. Countries will be explaining and thinking through the actual vaccination program that they’re going to have. That might involve refrigeration, for example. But unless there’s some credibility in the money available to them, then the manufacturers might not think that audience is as important as somebody in an advanced economy.

Brancaccio: Isn’t that fascinating? And you alluded to this, but the World Bank’s also working with countries as those countries review, do they have the infrastructure to handle the vaccine and get it to where it needs to go?

Malpass: That’s right, the bank has had over the last, I don’t know or so, 15 years or so quite a bit of experience with vaccination processes, working with the international community. And it often involves some kind of prompt distribution, because the vaccines might have a short shelf life. So those are experiences the bank can bring and lead through the system. And in March and April, working from home, World Bank people were able to establish relationships that reached 111 countries where we could give them a grant and then see that they were purchasing COVID-related equipment. So that itself is a valuable part of this that can extend to the vaccines and also the delivery, the distribution system that a country might choose.

Brancaccio: This really underscores the fact that developing a safe and effective vaccine is one of the great human challenges perhaps of all time, but getting it to people around the world is an additional colossal challenge.

Malpass: Yeah, this is going to combine communication, meaning how do you explain to people that this is really important to their lives, to their prospects. And especially if it’s a little less important for younger people, but you still want young people to be vaccinated because that becomes a transmission mechanism to people that are more vulnerable within their society. So just as we wanted people to use protective equipment. Because you know, one country has an impact on another country. We’re all part of the same, same world. And so it’s going to be important to have some vaccination capabilities almost worldwide.

Brancaccio: Well, almost tugging in the other direction, though, is this challenge of what some call “vaccine nationalism.” Richer countries will serve their own populations first, especially countries that invested in the creation of the vaccines. Yet as you point out — well, different way of saying what you just said is that public health experts keep telling us that no one is really safe from coronavirus unless everyone, everywhere is safe.

Malpass: I think there’s going to be, you know, different parts of that point that you’re making. In India, they have very good manufacturing capabilities. And so as a vaccine is available, they may have the capacity to take care of a giant population there. And China also has capabilities. And Europe and North America [and] Japan have capabilities. And so some large parts of the global population will, to an extent, be able to take care of people in their countries, and then have some leftover. That’s what we’re trying to seek with market buying capacity. I think it won’t take that big a price to get manufacturers to say, yeah, we can make extra. And if it goes to a good cause, we’re for it.

Brancaccio: What else needs to be done in the name of global coordination? You know, I’m thinking, for example, the controversy of the World Health Organization and the U.S. withdrawing from it. I mean, you know, this is going to take exquisite, complex levels of coordination. The World Bank is playing a role. But who should be, you know, watching over this on the global stage?

Malpass: There is underneath the surface, a lot of international coordination that goes and cooperation, I think that’s a better word for it, that goes on between the World Bank and the IMF, the Inter-American Development Bank, Asian Development Bank, African Development Bank and also the various parts of the United Nations. And so my thought on that is that if we set goals, meaning that we want successful, safe vaccines to be available, even to poor countries, there’ll be a lot of cooperation among the various. And especially if people put aside a little bit, who gets the press release or who gets the headline and puts it more that people in a poor country, did they actually have access to vaccine? That’s really what our focus is.