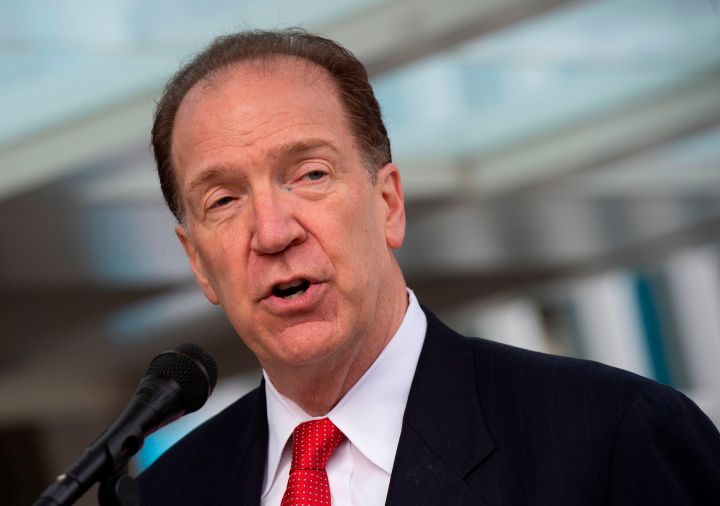 COPY
"Vaccines are critical because they reduce the hospitalization, because they allow economies to function," says David Malpass, president of the World Bank. Andrew Caballero-Reynolds/AFP/Getty Images

"Vaccines are critical because they reduce the hospitalization, because they allow economies to function," says David Malpass, president of the World Bank. Andrew Caballero-Reynolds/AFP/Getty Images
Listen Now

What’s in store for the global economy in 2022? According to the World Bank’s annual “Global Economic Prospects” report, global growth this year is forecast to slow down compared to last year, amid new challenges from coronavirus variants, supply chain disruptions, high commodity prices and more.

World Bank President David Malpass spoke with Marketplace’s David Brancaccio about the report’s projections. The following is an edited transcript of their conversation.

David Brancaccio: One headline from this, if you’re listening in the developed world, is that growth here in 2022 should be strong — not rip-roaring 2021 levels, but strong enough so that maybe by next year, the richer countries will have reversed the effects of pandemic on the economy.

David Malpass: That’s right. So that’s good, there is a recovery going on. But the challenge is that for developing countries, and especially for the poorer countries, it’s not much of a recovery. One of the ways to think about it is on a per capita basis, they’re doing about one-tenth as much of a recovery as the advanced economies. So that’s a big challenge in terms of food security, in terms of physical security. Governments are having big challenges holding things together because of the pressure.

Brancaccio: This, despite the fact that [in] the year we just completed, growth looks, on paper, fairly strong in those lower-income countries.

Malpass: That’s true, there was a recovery. But I think what a lot of people are feeling is a slowdown from 2021, and not much of a recovery from where they were pre-COVID. For example, on a per capita basis, people in the poorer countries are only seeing 0.5% real growth, whereas in the advanced economies, they’re seeing 5% real per capita growth. So there’s this big differentiation going on in the world. And two factors make that worse: The inflation hurts people at the bottom the most, and then there’s the prospect of interest rate hikes in the advanced economies. And so that puts further strain.

Brancaccio: We should explain: When interest rates go up in the developed world, it makes the interest rates you could get as an international investor — by investing in emerging markets, for instance — a little less attractive. So capital sometimes flows away from the poorer countries when interest rates are higher, say, in the U.S.

Malpass: That’s right, and it’s worse than that. If there’s a 25 basis point hike in the advanced economies, there might often be a 50 or 100 basis point hike in developing countries. It’s harder for them to keep up. So it’s both the inflation and the interest rate hikes that are posing challenges, and that looks like it’s going to intensify in 2022, holding them back.

Brancaccio: And so if you’re living at the margins, inflation becomes a much more acute problem. You may not be able to pay for food if it gets more expensive.

Malpass: That’s right, and there’s shortages of food. So the supply chain’s problem that has affected the advanced economies has meant that they suck in the container ships — those are being diverted to the advanced economies to keep things on shelves. And that means, for the poorer countries, there’s really no prospect of getting shipments in. So they’re falling further behind, and I think that will go on well into 2022, especially given the imbalances still in the macro policies.

Brancaccio: Just about every country had to borrow a lot to get through the worst of the pandemic, but that’s especially true in lower-income countries. And that burden of debt, in an environment of rising interest rates, is going to be a very tough burden.

Malpass: That’s right. Many of them are financing themselves at the short end of the curve. So as interest rates go up, it hits them very quickly. Even the advanced economies have shortened the duration of their government borrowing. And so that puts immense strains on the short end of credit markets. That’s exactly the spot where small businesses need to borrow. Many of them are floating rate borrowers, and so as interest rates go up, it hits smaller businesses harder than bigger businesses. And the same in developing countries — they’re hit harder than advanced economies. So this inequality problem, I’m afraid, is going to keep getting larger, not smaller.

Brancaccio: If only I knew someone to call it the World Bank who would be in a position to help. I don’t mean to be flippant about this, but this is part of your role as a participant in policy.

Malpass: That’s right. We care a lot about how the people in the developing countries are faring in this challenging time. It’s a huge toll from COVID and from the shutdowns, and now from inflation and higher interest rates. What we’re doing is trying to put out a lot of loans where we can, and also a lot of advice to countries in terms of what they can be doing. And then also calling attention to the inequality problem that we’re facing. We have this odd situation where the Federal Reserve is using two tools — and this is true of other major central banks as well — the rate hike tool, and also the Federal Reserve is now talking about reducing the size of its balance sheet. But the real issues that put strain on small businesses are the regulatory policies of the banking industry that keeps guiding them towards less-risky assets. That means small businesses, new businesses, women-owned businesses are left out. And then also, the Fed is still buying the long end of the curve, long duration, and that directs capital to a very concentrated group of people at the top, which is, I think, really problematic from an inequality standpoint.

Brancaccio: And swirling over this entire discussion is something that is not just an economic, but a public health issue. Getting vaccines to every place in the world, rich or poor, has to be part of addressing the widening inequality that you’re talking about.

Malpass: That’s correct. Vaccines are critical because they reduce the hospitalization, because they allow economies to function. Very importantly, the schooling — children, when they’re out of school, the data shows they’re falling behind. So it’s vital that teachers and frontline workers be vaccinated. This was a big problem, clearly, in 2021 because many of the vaccines were diverted or kept in the advanced economies. So we’re trying as hard as we can to get the shipments into the developing countries and then get them deployed; actual shots in arms. We’ve made some progress on that but not nearly enough.