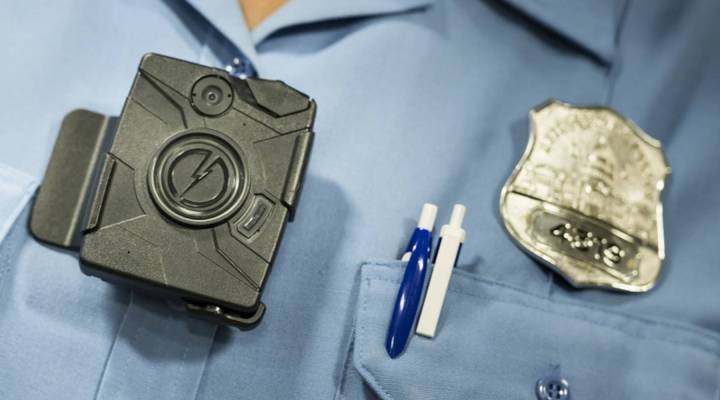 COPY
Stun-gun manufacturer Taser is expected to report earnings tomorrow. Analysts are forecasting numbers to be down from a year ago, and it’s likely connected to controversy over its fastest-growing product — police body cameras.

As more and more cities sign up for Taser cameras, their critics are getting louder, saying the company’s relationship with some police departments might be a little too cozy.

For law enforcement equipment companies, that’s a lucrative market. And so far, Taser is dominating it. In at least two large markets, Los Angeles and Philadelphia, they’ve done it by skipping the usual bidding process and instead piggybacking off existing stun-gun contracts. Critics say that gives them an unfair edge.

Sitting in his office on the 31st floor of a building in Center City Philadelphia, attorney Chris McCabe read the wonky language of a memo prepared by city officials.

“Currently the city has no procurement vehicle for these specific goods and services, and a competitive bid for these services would be time prohibitive,” McCabe said, reading the memo.

It means that the city hasn’t opened up a formal bidding process for a $1.4 million body camera contract expanding a pilot program. Doing so, officials determined, would take too long. McCabe, who negotiated city contracts for more than a decade, said it was unusual, and that the bidding process was there so that contractors win not based on whom they know, but instead on who has the best price.

“You have to protect the taxpayer from fraud, corruption and favoritism, and that’s done through a publicly transparent competitive bidding process,” McCabe said.

“To imply that we’re trying to convince agencies not go out and bid, that’s their decision, and we’re happy to compete in either scenario,” Isner said.

Mike Purdy is a veteran contract consultant in Seattle. He said those public bidding rules can be cumbersome to private companies trying to move fast. Using existing contracts to get around them? That’s savvy business.

“Taser is doing a good job from their company’s perspective,” Purdy said. “But yes, there is a clash with openness and competition and things like that.”

The people really ticked off about Taser’s edge? Other makers of body cameras.

“If we don’t get a chance to propose, and we’re not on the playing field, it’s hard to win the game,” McKeeman said.

Taser’s Isner, meanwhile, wondered if the way government does business really leads to the best outcome. Does being the lowest bidder always mean you should win?

“Would you feel comfortable sitting on an airplane, where every single part of the airplane was awarded to the lowest bidder? I wouldn’t,” Isner said.

Philadelphia city officials seem to have heard the outcry. They now promise that the next batch of body cameras they buy will come after competitive bidding. The city said its longstanding relationship with Taser won’t’ be factored in.