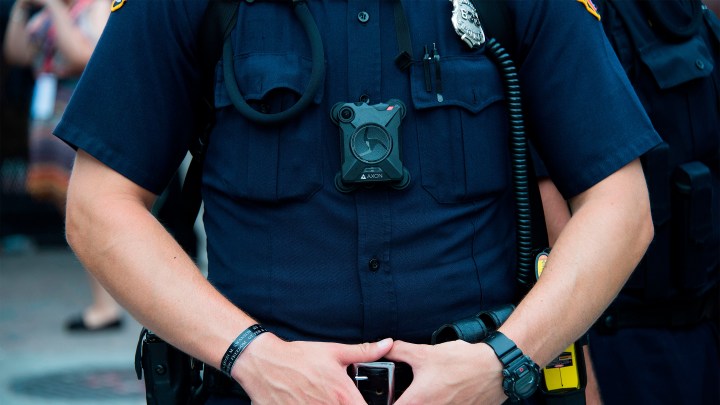 COPY
Body cameras have become a critical point of debate over police accountability, but some worry about the equipment infringing on protesters' privacy. Jim Watson/AFP via Getty Images

Body cameras have become a critical point of debate over police accountability, but some worry about the equipment infringing on protesters' privacy. Jim Watson/AFP via Getty Images
Listen Now

The Arizona-based police equipment company Axon will report second quarter results Aug. 6. The company makes a variety of police equipment, including Tasers. It also makes police-worn body cameras, and it has seen growth in contracts for those amid nationwide social unrest.

The company said most of the nation’s large police departments are clients.

“It’s sort of a bittersweet phenomenon,” said Rick Smith, Axon’s CEO. “You know, candidly, you never like to feel good about a situation where the world is in so much pain and the problems are becoming worse, and therefore they’re going to get more attention.”

Body cameras have become a critical point of debate over police accountability following shootings by officers. Some critics say the cameras and other equipment raise privacy concerns.

“This is part of the apparatus of the surveillance state,” said Mathew Sandoval, an honors faculty fellow who teaches about race and democracy at Arizona State University. He is a Latinx activist, and said police video can be used against peaceful protesters.

But others say that the cameras play an important role in police work.

“I think … probably the best thing that can happen to law enforcement is the body-worn camera, because if you’re doing your job, if you’re doing things the way you’re supposed to, it’s going to be recorded and it will back up your story,” said Kevin Robinson, a retired assistant Phoenix police chief and professor of criminal justice at Arizona State University.

Axon said live streaming from a camera lends transparency to police work and helps gather important evidence. Earlier this year, Axon released a new police body camera that streams live footage to a command center. An older model must be activated by an officer. The newer model starts streaming when an officer draws a weapon, activates the light bar on a patrol vehicle or deploys a Taser.