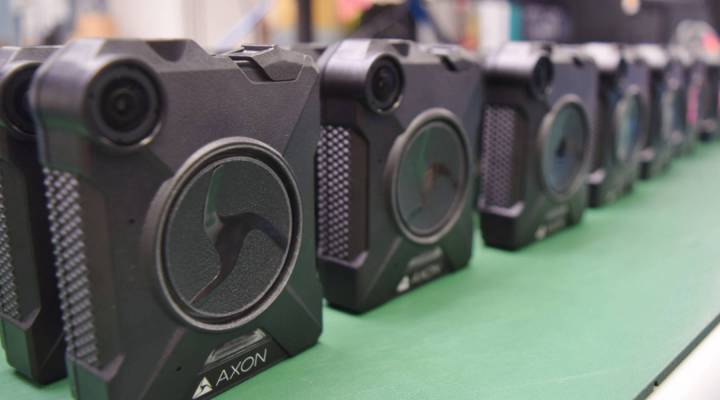 More and more police departments are using body cameras as they look for ways to protect themselves, their communities and to preserve evidence. So the lucrative new bodycam market is becoming fiercely competitive. But the real money to be made is on the back end.

Spokesman Steve Tuttle watches a production line as the cameras come together.

“We’re doing about 500 a day, and we could easily ramp that up,” he said. Tuttle said the cameras have become such a focus for the company that it has rebranded, now calling itself Axon after its most popular camera model.

Axon cameras are in use at departments in 36 major U.S. cities. In a bid to assert its dominance on the market, Axon recently came out with an aggressive offer: a free body camera for every police officer in America who wants to try one.

“Now that’s a pretty big shot to fire out there,” Tuttle said. “And we’re encouraging our competition to do the exact same thing.”

“Taser’s offer is the venus fly trap of the body-worn camera world,” said Gray Hudkins, executive vice president of Safariland, which is the parent company of camera maker Vievu. His company has said in lawsuits that previous Axon giveaways violate the bidding process police departments use to look for suppliers. “You know, there’s no such thing as free. Whenever somebody is doing an evaluation of a product, there’s a whole back end to it that has implementation costs and makes it very difficult to switch out of once you’re done,” Hudkins said.

Vievu said departments may be lured in by the free front-end equipment but then become attached to the evidence storage system, and that’s where the real money is. Axon’s data storage can cost anywhere from $50 to $100 per officer per month. Police departments that buy an Axon camera have to use Axon software.

Michael White, a criminology professor at Arizona State University, said hardware and software shouldn’t be the only considerations.

“The other thing you’ve got to think about is the length of the contract,” White said. He wrote a guide on the body camera procurement process for the Department of Justice. “So if you’re going to do cloud-based storage, you’ll do it for X number of years, and that’s the negotiation piece,” White said. “Then what’s going to happen after that three or five years are up?”

He said while most of the larger body camera companies contract with Microsoft Azure to store the data, agreeing to a proprietary software system can chain a department to a particular product.

“Last I saw, there are more than 50 different companies to choose from, so it can be very, very overwhelming,” White said.

Commander Noah Johnson oversaw the Tempe Police Department’s search for body cameras. It went with Axon because its evidence platform was easy for his officers to navigate.

“Anybody can make a camera,” Johnson said. “The biggest piece for us is the back end — the data management.” At the end of their shifts, officers can plug the camera into a docking station, and then access the videos from a smart phone or a computer. “It’s a very simple thing. It’s got to be cop friendly, right?” Johnson joked.

In addition to the monthly data storage costs, Johnson had to reassign deputies to manage the body camera program. It’s been a huge investment of dollars and labor — about $360,000 a year — but he says it’s worth it.

“You can’t put a price on developing a better relationship with your community, right?” Johnson said. “It’s kind of like the commercial, ‘It’s priceless.’”

But there is a significant price on the data storage, and that’s exactly what the body camera companies are banking on.