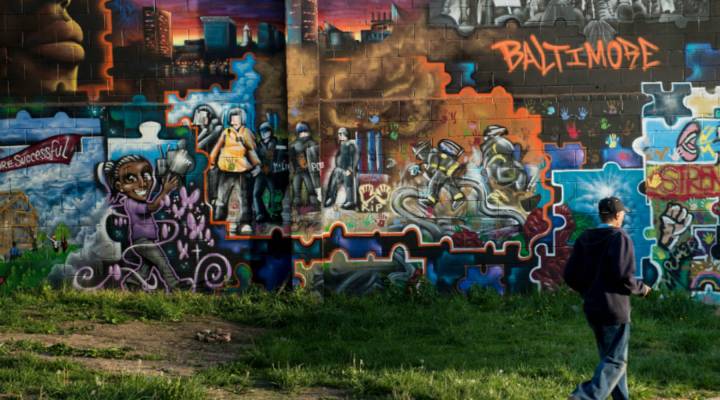 COPY
A man walks past a mural dedicated to Freddie Gray on Monday in Baltimore, Maryland. BRENDAN SMIALOWSKI/AFP/Getty Images

A man walks past a mural dedicated to Freddie Gray on Monday in Baltimore, Maryland. BRENDAN SMIALOWSKI/AFP/Getty Images
Listen Now

This week marks a year since the city of Baltimore erupted in violence and looting following the death of Freddie Gray, a young black man who died in police custody. The uprising brought national attention to stark inequality in the city. More than half the adults in the mostly black neighborhood where Gray grew up are unemployed. For a lot of people in impoverished neighborhoods, a history with the justice system can be a barrier to finding work. One program is trying to turn that around.

Every Tuesday morning, dozens of people gather in the basement of Zion Baptist Church in East Baltimore. Most of them have criminal records. Some are in drug treatment, or still using.

“We’re waiting on some of you because we know you’ve got to get your stuff clean, but we ain’t leaving you behind,” Pastor Marshall Prentice told the group at a recent meeting. “Everybody’s going to get a job. Everybody.”

This is Turnaround Tuesday, a program that helps ex-offenders – they prefer “returning citizens” – find living-wage work.

Jeffrey Fortune, 32, got out of prison about a year ago after serving 15 months on a gun charge. He’s looking for construction or warehouse jobs.

The first goal is to make people like Fortune stronger applicants. They get help building resumes, practicing interview skills and learning how to get along in a workplace. People who’ve done long stints in prison tend to do well in jobs with a lot of structure, said executive director Melvin Wilson.

“We teach them how to take the skills that they actually learned during incarceration, and use them as they move forward and back into the work environment,” he said.

The next step is convincing employers to take a chance. In Baltimore it’s now illegal to do a criminal background check until late in the hiring process. Even so, a spotty work history with long gaps in employment can keep an ex-offender from getting that far, Wilson said.

“We’ve had people that could put in 17 to 20 applications a day and not get a phone call,” he said. “So our main focus has been to change the hiring culture in this city, that people need a second chance.”

So far 12 employers have come on board, including a direct mail company, an electrical contractor, and a transportation and security company. Since it started in early 2014, Turnaround Tuesday has helped more than 100 people get jobs, Wilson said, at an average wage of $12.50 an hour. They continue to get support for up to two years after they’re hired, and most of them are still working.

A partnership with Johns Hopkins hospital helped William Glover-Bey, 59, find a job cleaning floors in the emergency department. A former drug dealer who turned his life around in the late 1990s, he’s now a Turnaround Tuesday leader.

“I came through that movement,” he said. “We don’t call it a program – it’s a movement, because it’s not going to end, and there are so many people out there like myself who are waiting for opportunities.”

A new partnership with several hospitals in the city is expected to produce hundreds more jobs starting this summer.