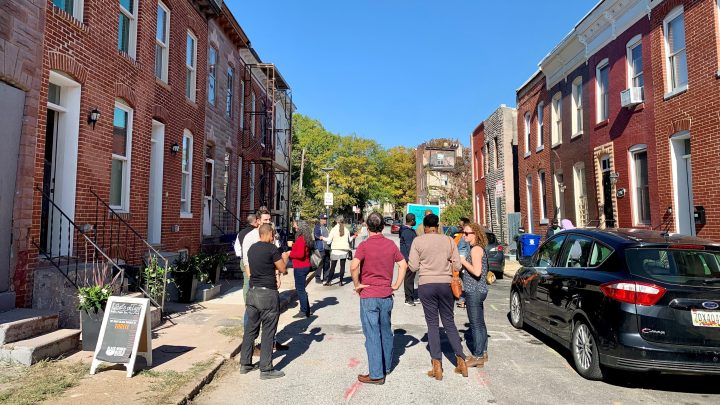 COPY
Black Women Build - Baltimore threw a party in October to celebrate the progress on the block. Amy Scott/Marketplace
The Block

Black Women Build - Baltimore threw a party in October to celebrate the progress on the block. Amy Scott/Marketplace
Listen Now

Poinsetta McKnight stepped out her front door with a broom, shovel and 30-gallon trash bag and went to work sweeping the street.

“People will throw glass, nails — they don’t care,” she said as she swept.

She’s been doing this most mornings for decades, keeping the 1900 block of Etting Street in Baltimore clean.

“One time the inspector, when he came through about three or four years ago, he said, ‘You could eat off the ground in here,’” she said. “He said, ‘It’s just that nice.’”

McKnight — or Ms. Poinsetta, as everyone around here calls her — is retired from the U.S. Customs Service. She’s 78 and grew up in the brightly painted red brick row house she now owns, on what was once a block full of life.

“People put flowerpots out on the street, with flowers and everything, and they’d paint the steps,” she recalled. “It was really nice.”

There’s a lot of history on this block, in one of Baltimore’s oldest Black neighborhoods. In the 1960s, her parents helped found a drum and bugle corps that played all over Maryland. McKnight was the group’s secretary. When President John F. Kennedy came to speak at a rally in the city, “our organization furnished the music,” she said. “I had a black and white TV then — I didn’t know he was a redhead until then.”

Over the years, her beloved block declined, a victim of a familiar pattern in redlined neighborhoods. The crack and opioid epidemics and mass incarceration devastated West Baltimore. Subprime lending led to foreclosures, and real estate speculators let houses sit empty. Eventually, the city tore down half the block. McKnight and some neighbors got together to paint vacant houses and fence off a troublesome empty lot.

By 2019, she was the last homeowner living on the block, pleading with city officials to spare her house. Now, after years of seeing the block go down, she said, “I’m seeing it come up.”

It’s coming up because over the past two years the nonprofit Black Women Build – Baltimore has been buying vacant houses, training young Black women to help renovate them, and then selling the houses to the women at affordable prices. So far, there are four new homeowners on the block. Another three houses are almost done, and McKnight is finally getting some help.

Later that same morning, a bunch of volunteers arrived to start clearing a vacant lot at the end of the block for a community garden. One of the new homeowners, Chanelle Austin, trimmed overgrown branches that had swallowed a fence along one side of the lot. She’s pretty comfortable with power tools after helping rebuild her house.

“It’s a perfect place for an urban garden,” she said. “I’m excited to be a part of it. It’s right outside my door.”

Quanshay Henderson was happy for the company. She was the first to buy a house through Black Women Build. When we first met more than a year ago, she was lonely, waiting anxiously for more neighbors. Now that people are moving in and other developers are building in the area, she’s experiencing one downside of revitalization.

“This is kind of selfish of me, but I realized that all the parking spots are quickly being taken up on this block,” she said.

Black Women Build’s mission is to build not just houses and wealth, but community, too. Henderson has been taking a weekly class to learn how to mobilize her neighbors for better conditions.

“One of my ideas is to figure out how we can get parking permits,” she said. “Anything else, I would have to see what people care about.”

After a while, McKnight, the original activist, comes across the street to watch the new generation.

“I just got through cleaning up,” she said, laughing. “I wish I could have had you all here this morning.”

“Well, we’ll see if we can help you out moving forward,” said Derrick Weston, a gardener and community organizer leading the effort to bring fresh vegetables and flowers to the neighborhood.

“I appreciate that, but it should be beautiful up here,” McKnight said.

A few days later, Black Women Build – Baltimore threw a party to celebrate the progress on the block. The seven houses, with their restored brick facades and white cornices, gleamed in the sunshine. Potted plants once again lined the sidewalk.

The city housing commissioner was there, along with state officials and donors — and of course, the group’s founder, Shelley Halstead, the carpenter who saw the potential in these houses when the city was about to tear them down.

That’s the monthly payment for a completely refurbished two-bedroom house. A comparable rental in the area could cost twice that. With tax credits for historic preservation, the annual property tax bill for one house is just $9.33.

Halstead isn’t stopping here. She plans to build a community center on one of the vacant lots, with a tool-lending library. She’s still trying to buy a couple of crumbling houses, whose owners have been holding out. And she’s fighting for other blocks, too. Black Women Build has bought 10 more abandoned houses nearby. But there was another reason to celebrate that day.

“Today is Ms. Poinsetta’s birthday,” Halstead told the group as McKnight joined her on the sidewalk. “When I first saw this block and I walked around it, and I saw her garden, I swear to God, that is when I was like, ‘I’m going to fight for this block. We have to save it.’”

“I’m thrilled that you came here, because I asked them to save this block,” McKnight said. “My wish came true.”