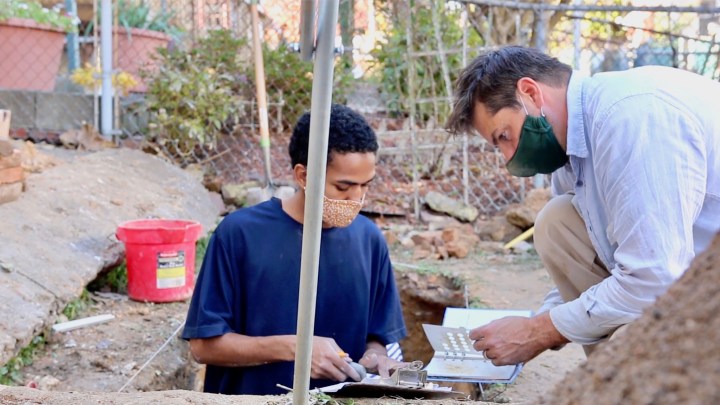 Behind a small brick row house in Druid Heights, one of the oldest Black neighborhoods in Baltimore, a bunch of students and volunteers were hard at work excavating the backyard. The group had painstakingly carved out a pair of trenches in a corner of the lot, searching for where the outhouse, or privy, would have been when the house was built in the late 1800s.

“Because a privy, for most of the 19th century, is the place you put your trash,” said Adam Fracchia, a professor of archaeology at the University of Maryland, who was leading this urban dig.

“The great thing about privies is most people don’t think about what they throw away,” he said. “It’s out of sight, out of mind, so it gives us an unbiased sample of what people had.”

Those samples are preserved in layers, he said, “and you can read those layers through time, kind of like a layer cake.”

One of the students learning to do that was Alexander Symonette, a junior sociology major at Morgan State University, a historically Black college in Baltimore. This was his first archaeological dig.

“Almost my first time holding a shovel,” he said.

As Symonette stood waist-deep in one of the trenches, Fracchia showed him how to identify the different layers of clay, sand and coal ash, using a special color-coded chart.

“Just take a big chunk out,” the professor instructed, “so we can get all the colors of the rainbow there.”

After hours of digging, the team still hadn’t found the privy. But they had unearthed dozens of artifacts from the late 19th and early 20th centuries: A fragment of a clay smoking pipe, a doll’s arm and tea set, a bottle marked “liver oil” and an etched piece of slate a child might have used to practice letters.

“You think about the values of education, teaching,” Fracchia said. “This tells a lot about the individuals here.”

Individuals whose stories and circumstances are often overlooked by archaeologists, like the laborers, waiters and drivers who lived in these “alley houses” between Baltimore’s more prominent streets. Even something as mundane a bone from a piece of meat, Fracchia said, can help paint a picture of economic life.

“What type of the cut are they getting?” he said. “High-end quality cuts, or are you getting mid-range or things that don’t have a lot of protein?”

Fracchia will take all these artifacts back to the lab and analyze them to try to build a picture of who lived here and what their lives were like.

Census records show a woman named Sarah McGill rented this house, from at least 1900 through 1940. Occupation: laundress. She had a daughter, possibly the owner of that doll and tea set. The McGills were Black, like most of their neighbors, in what by then was a deeply segregated city. Baltimore has the shameful distinction of passing the nation’s first racial zoning law in 1910.

“This is not that many generations removed from right now,” Fracchia said. “That’s what I think is important about telling this bit of history.”

That’s why Shelley Halstead, whose nonprofit owns the house now, was eager to have Fracchia and his crew come here. Today, nearly 1 in 3 houses in the neighborhood is vacant, and the median household income is just $21,000.

Halstead is executive director of Black Women Build – Baltimore, which is rehabbing the house Sarah McGill rented all those years ago — and many like it — for other Black women to own, and in the process transforming a block that had been all but abandoned just a year ago.

But it’s more than that. Overcoming the city’s racist legacy requires really confronting it, she said. Baltimore finally built a sewer system in the 1910s, but even 40 years later, thousands of houses still lacked indoor plumbing.

“They used to have latrines out back, you know, back even into the ’50s,” Halstead said, feigning shock. “It’s like, I wonder why, because the city wouldn’t put [expletive] sewer lines here. Do you think people liked [expletive] in a hole?”

Another expert on the dig was archaeologist Alexandra Jones, who sifted buckets of soil through a large screen, searching for more clues from the past. She’s founder of a nonprofit called Archaeology in the Community, which is aimed at bringing this kind of research into underserved neighborhoods — and involving the people who live there.

“Oftentimes, the communities that are most forgotten in the archaeological record tend to be these communities,” she said.

Jones’s group, and this dig, are part of a growing movement to open up the field, which is overwhelmingly white.

“For me, as an African-American woman, it’s super important to give voice back to those who’ve been omitted, historically,” she said. “In addition to that, making opportunities for students of color, women of color — to bring them into the field as well.”

Women like Jourdan Wallace, another student from Morgan State.

“When you think about archaeology, you think about some ancient culture, some battlefield a thousand years ago, when history is yesterday,” Wallace said. “Literally digging in the ground and picking up things from the past, that kind of reaffirms who I am, who my people are.”

Wallace, 20, is from Compton, California, and said she isn’t planning to become an archaeologist. She wants to be a sports agent.

The students never did find the privy vault. It may have been destroyed when the water and sewer lines were finally put in, scattering the contents until someone cared to dig them up.