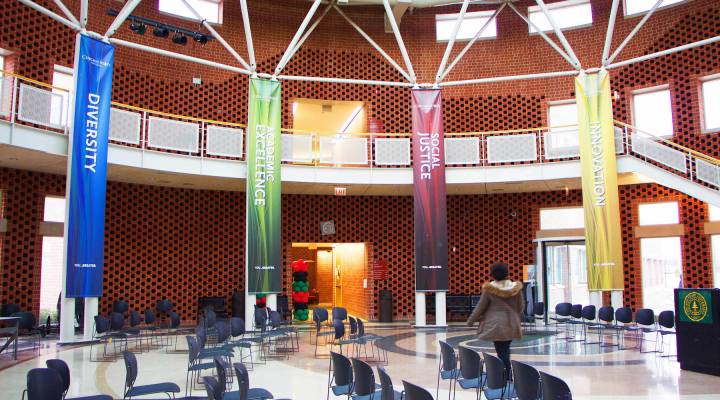 COPY
Inside the Chicago State University student union, where banners for a recent gathering highlight some of the schools core values. Nova Safo/Marketplace

Inside the Chicago State University student union, where banners for a recent gathering highlight some of the schools core values. Nova Safo/Marketplace
Listen Now

A state budget stalemate in Illinois, which has dragged on since last July, is offering a masterclass on the destruction political gridlock can cause.

At risk are the state’s 57 public universities and community colleges, which were once a model for access and diversity.

In the mid- to late-1990s, Illinois was the top performing state in helping its residents attain higher education through need-based grants and affordable tuitions, according to a report by the University of Pennsylvania’s Institute for Research on Higher Education. The report said such efforts helped minority communities.

Today, minority students are akin to collateral damage in a battle between the state’s Republican governor and Democrat-controlled legislature.

The two sides can’t agree on a budget. State government has been limping along since last summer using accounting maneuvers, which have kept government functioning.

But without an official budget, the state cannot release  funds to outside organizations, including to its public universities and community colleges. That means some schools are missing a third or more of their annual income.

The biggest of the state’s nine universities, including the formidable University of Illinois,  can weather the storm by relying on  money coming in from endowments and private donors.

Smaller schools have been operating only on cash reserves and tuition money, and some are now running out of funds.

Chicago State University announced in February that it is in dire financial straits and in danger of closing. The university canceled spring break and shortened its school year, so that it doesn’t run out of money before graduating students finish the semester.

University president Thomas Calhoun, who has been critical of the governor’s role in the budget impasse, said he is planning to lay off employees. Even tenured professors might not be immune.

“All employees have received notice or will receive notice, including the president of the university, all senior administrators. There are no exceptions,” Calhoun said at a press conference.

Chicago state is trying to survive until fall, when new tuition money will come in from students. But there is a real danger that the university might close completely. Just the potential of such an outcome could trigger a downward spiral. Take the example of what Chicago State freshman Noah Burke plans to do, because of the school’s financial troubles.

“I’m definitely planning on transferring. I’m in the process of it, gathering my transcripts,” Burke said in an interview at Chicago State’s cafeteria.

He said some of his classmates are doing the same. “My friends are basically…saying they’ll go to Atlanta, different cities,” Burke said.

If the university were to close, it would disproportionately affect minority students. Almost 70 percent of its student body is African-American.

Chicago State is not officially a historically black college or university, an HBCU, which is a federally-recognized designation. Still, the school shares many of the characteristics of such institutions, said Cliff Conrad.

Conrad is a professor of higher education at the University of Wisconsin and a nationally-recognized expert on minority-serving schools. He has visited Chicago State, along with many HBCUs.

“Predominantly black institutions, like Chicago State, have cultures and practices that are often very different from mainstream higher education,” which allows them to better serve traditionally under-represented students, Conrad said.

Those students might not get the support they need to succeed at other universities, he said.

The state’s budget impasse could potentially cause damage to many other universities and community colleges in Illinois. There are anecdotal reports that some professors are being approached by schools in other states, which are trying to lure the professors away with the promise of a more stable financial environment.

Making matters even worse, the timing of the budget crisis could negatively affect the next school year by depressing enrollment, said Barbara Gellman-Danley, the president of the Higher Learning Commission, the agency which accredits universities in the Midwest.

“It is a very bad time to [have this crisis] when decisions are being made about fall enrollment,” Gelman-Danley said, “Students may choose not to attend based on the precarious situation of the institutions.”

The Higher Learning Commission has sent notices to all 57 public universities and community colleges in Illinois, asking for details about their financial status. The agency wants to know if there are others among the group, especially those with smaller cash cushions, that are also close to facing the same difficulties that are plaguing Chicago State.

“We are concerned about a long-term impact, because if an institution becomes increasingly behind in paying its bills… a lot of things can happen,” Gelman-Danley said.

It is not just institutions that are suffering.

Illinois has also not sent money it had promised to college students who qualified for need-based Monetary Award Program grants. The MAP financial aid grants can total as much as $5,000 and are used to pay for school tuition and fees.

“It definitely hits low and moderate income students very hard,” said Michelle Asha Cooper, president of the Washington, D.C.-based Institute for Higher Education Policy. “Many of those students also tend to be first-generation students. Many often are students of color.”

Cooper said loosing state financial aid could mean some of those students give up on college altogether. Others might have to take additional jobs, which slows down their college education and puts them at risk of never finishing their degrees.

The higher education crisis has put increasing pressure on state officials to come up with a resolution to the months-long budget impasse.

On one side of the stalemate is newly-elected governor Bruce Rauner, a Republican who came into office a year ago promising major reforms to reduce the state’s chronic budget deficits. On the other side is Democrat Mike Madigan, the powerful speaker of the state house. Madigan has opposed many of the governor’s plans, including spending cuts and changes to union laws.

“We’ve attempted to meet halfway. Yet, [Rauner] is holding out for all of what he wants, the way he wants it. And he’s not been persuasive,” said Steve Brown, Madigan’s spokesperson.

Governor Rauner has a different story, insisting that he wants to fund higher education.

The governor’s office would not make Rauner available for an interview, despite repeated requests. A spokesperson directed us to Rauner’s public statements.

Madigan has balked at those proposals.

“I’ve proposed reforms to save tax payer money and grow the economy. They were ignored. And I’ve said to the speaker… I’ll let you cut whatever you want. He’s ignored that. All he’s focused on is trying to force a massive tax hike on the people of Illinois,” Rauner said during one recent press conference.

The state legislature recently passed one funding bill that did not include spending cuts, and the governor vetoed it.

As the political stalemate drags on, state universities are tightening their finances. The governor identified two other schools, in addition to Chicago State, that are under financial strain. One of those schools, the rural Eastern Illinois University, recently announced layoffs.