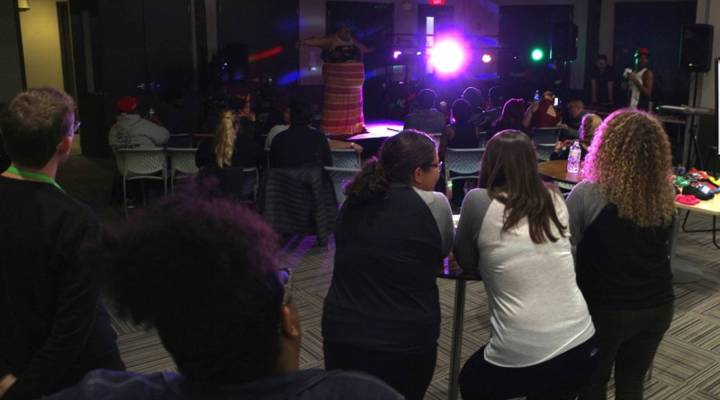 COPY
About three dozen of Nashville's homeless young adults spent the night at The Oasis Center during this year's "Youth Count," which features a talent show and karaoke slumber party. Tony Gonzalez/WPLN

About three dozen of Nashville's homeless young adults spent the night at The Oasis Center during this year's "Youth Count," which features a talent show and karaoke slumber party. Tony Gonzalez/WPLN
Listen Now

A building boom in Nashville, Tennessee, has sent rents soaring and filled the sky with construction cranes. Down on the streets, officials say homeless young adults are paying the price as an affordable housing shortage intensifies.

Now the city is one of several nationwide that’s trying to size up the problem with a new way to count its homeless youth. The Oasis Center for at-risk youth hosted a slumber party, complete with a talent show and karaoke.

It happened on the one night each year when most cities count their homeless populations by canvassing streets and shelters.

At Oasis, in exchange for coming in to be counted, homeless teens and 20-somethings could spend the night; receive free medical care, clothing and a meal; and get some much-needed TLC from staffers like Casey Woods.

She’d greet new arrivals with hugs and praise, like when Kalwin Perrin came in from the cold. “How are you?” she asked. “Oh, you look so handsome. I’m so proud of you!”

Perrin was no stranger to the center. This year, he was asked to emcee the talent show. “Dancing, singing and some spoken word — I know I’ll see some spoken word,” he said while preparing.

While Perrin’s housing is unstable, his energy is unchecked. He sang, danced, cracked jokes and led a revue-style rendition of “Proud Mary,” complete with synchronized dancing by several staffers and some of his homeless peers.

Of course, there is a serious side to the “Youth Count.”

Homeless young adults are difficult to find, since some rarely sleeping on the streets or in shelters. They often choose to couch hop or get motel rooms together. And they go uncounted. So while Nashville officials estimate there are as many as 3,000 homeless young people up to age 24, only about 200 were counted last year.

Counting the homeless accurately helps a city win a larger share of federal grants. Oasis also learns about their situations through surveys, in part so the city can respond.

Perrin, for example, tells staff he’s slept in several places in the past month. The night before, it was a friend’s couch. He has had it even worse. He says he was abused and later rejected by family when he came out as gay. After foster care, it’s been six years of sporadic homelessness.

Kalwin Perrin, who has unstable housing, got to pick up free clothing during the one-night “Youth Count” at The Oasis Center in Nashville. The event includes perks for homeless young adults, age 18 to 24, in exchange for getting them counted and surveyed.  (Tony Gonzalez/WPLN)

“I would cry most of the days,” Perrin said. “Some days I didn’t have anything to eat. I had lost weight. I (was) even down to just having one outfit. And I’d just wash this one outfit every day.”

It’s this somber backdrop that the staff knows well, said Michelle Hall, director of crisis services and transitional living. “We’re asking them to really trust us — that we’re going to get some information that in the long run is going to help them,” she said.

Hall said the city’s emergency shelters have improved, but she wants more funding for permanent housing solutions. “What we’re doing right now is piecemealing together plans to keep people alive night to night,” she said. “At the same time, it’s exhausting, for the people who are doing it and for the people needing those shelters.”

Hall said she sees condos replacing vacant lots and empty buildings, more enforcement of trespassing, and teens camping — even in the parking lot out back.“So that’s how hard it is for them to find places to lay their head at night,” she said. “They’re opting to stay in our parking lot.”

The net effect, she said, is to push the homeless out of Nashville’s downtown, and farther from services.

But for one night, they could come inside. About 35 did — although officials say that’s still just a fraction of who’s out there.