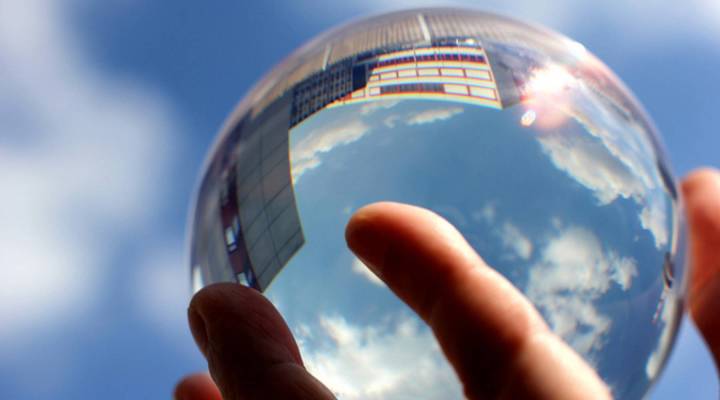 COPY
Corporations employ people to imagine and prepare for the future. Why shouldn't the federal government?  Christian Schnettelker/Flickr
Secretary of the Future

Corporations employ people to imagine and prepare for the future. Why shouldn't the federal government?  Christian Schnettelker/Flickr
Listen Now

Since then, his idea has bounced around the internet, never quite developing into a fully-fledged meme. We have a Secretary of Commerce, of Labor, of Defense. Why not a Secretary of the Future to help politicians think harder about how today’s actions might play out in 10, 20, 50 years? If it sounds weird, it’s not. Some big corporations — like Intel, Google, Cisco — already have them.

“It was my job to be the crazy one, to be the grit in the system,” said former Intel futurist Brian David Johnson, “with the CEO and many of the top officials, it would be my job to come in and present a future that really wasn’t quite rosy because the company needed to be prepared for that.” Johnson now works to advance the practice of futurism at Arizona State University’s Center for Science and the Imagination.

“Some of it is a mix of social science, looking at progression of technical research, looking at economic data, trend data, and even history,” said Johnson, “based on all these things, asking where do we want to be 10 years from now? And sometimes, what’s the future we want to avoid?”

Corporations don’t call them secretaries of the future. The shingle says CSO, Chief Sustainability Officer. The job often entails cutting carbon dioxide to help the climate, but these sustainability officers wrestle with all sorts of things that could put the company, its customers, or our earth out of business someday.

“This is a common misperception that many people have that sustainability is just about the environment,” said Harvard Business School professor George Serafeim. “It encompasses lots of environmental issues, but also lots of social issues like product quality and safety, workplace practices and robust supply chains, and governance factors as well.”

Secretaries of the future, Serafeim argued, deal in three stages. The first is compliance: making sure their company’s not breaking the law. The second stage is efficiency: boosting profits by saving energy and other resources. Then, maybe, if the company is really serious, they arrive at what Serafeim called the innovation stage, “integrating sustainability into the core of business, they are looking to address bigger problems in societies.” Which is not easy, according to Serafeim, “most companies are right now stuck in the efficiency stage.”

Among the companies that are weaving the future into their very make-up, Seraphim suggested, is L’Oreal of Paris. Now, there is a discussion to be had about cosmetics and body image, or animal rights advocates wanting more proof L’Oreal is, as advertised, cruelty-free, but L’Oreal is also a company that insists on metrics to show all of its products are getting better for society and the earth.

One of the biggest sticking points with shareholders and company leaders is return on investment. “The short term ROI on sustainability is not the right question to ask because we are not on a three month line,” Palt said. “What is very clear is…we have to develop supply chains that are sustainable, responsible, creating income for farmers, for communities, because it’s the only way that we can sustain on the long term.”