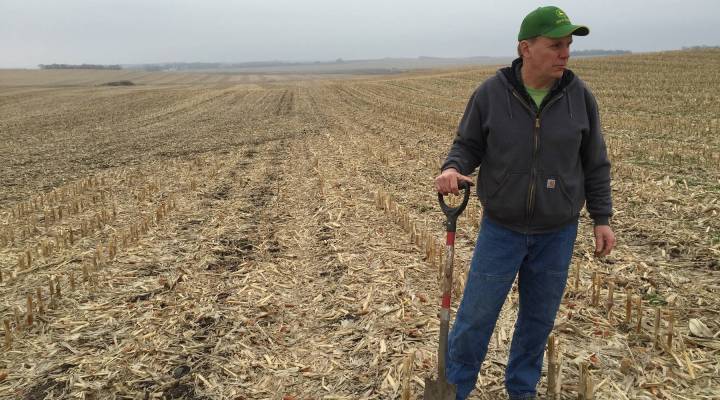 COPY
Farmers are trying to mitigate nitrate pollution from fertilizers and soil erosion in their production practices. But some say we need to shift away from corn and soybean production as the nation's biggest crops to other, more sustainable ones. Annie Baxter/Marketplace
Secretary of the Future

Farmers are trying to mitigate nitrate pollution from fertilizers and soil erosion in their production practices. But some say we need to shift away from corn and soybean production as the nation's biggest crops to other, more sustainable ones. Annie Baxter/Marketplace
Listen Now

Bruce Peterson, a farmer in Minnesota, was surveying a field where he planted a winter cover crop of rye.

“It’s a little bit green over here, but it’s really spotty,” he said.

He grabbed a shovel from his all-terrain vehicle and dug into a patch of ground where shoots of rye were coming through.

“The soil is nice and loose,” he said.

Peterson said the rye will make the soil mellower, potentially improving the yield on soybeans he’ll plant this spring. “It can prove out to give us some benefits,” he said. “You know, dollars and cents, economically — but also environmentally.

Environmentally, because the rye will also suck up excess nitrates that come from natural sources, but especially from fertilizers.

Nitrates are pollutants and make their way into streams and rivers, sometimes contaminating drinking water.

And they eventually wash down to the Gulf of Mexico, where they’re harming fish and shrimp.

The problem is, even if farmers take steps like applying fertilizer more sparingly, or using cover crops, increasing rainfall in in big corn-producing states will still flush a lot of nitrates into waterways.

Even if you’ve done everything right you’re going to get more leaching going on, because the climate is also changing,” said Satish Gupta, a soil scientist at the University of Minnesota. “We are getting two to four inches more rain now than we did in the past.”

An even bigger fix is in order, according to Bill Tracy, an agronomist at the University of Wisconsin-Madison.

“This is where the Secretary of the Future would come in,” he said.

Tracy said we need to think critically about having corn and soybeans as the nation’s biggest crops. There’s not only the problem of nitrate pollution from fertilizing corn to worry about, but there’s also soil erosion.

The thing is, getting farmers to grow other crops is tricky, Tracy said, when there are so many economic incentives — like crop insurance or the ethanol mandate — fueling the status quo.

“This is not a problem the farmers themselves can solve,” he said.

He wants a Secretary of the Future to help shift the economic incentives to other crops farmers could grow profitably, with lesser effects on soil and water quality.