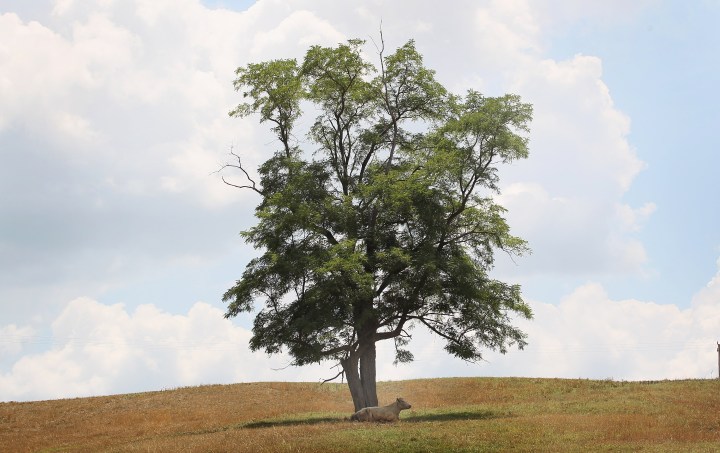 Presidential election coverage focusing on islands of blue counties in a sea of red put America’s urban-rural divide on display last week. But the division between urban and rural America goes back to the earliest days of U.S. history.

In his new book, “Pappyland: A Story of Family, Fine Bourbon, and the Things That Last,” author Wright Thompson writes about the family behind Pappy Van Winkle bourbon and the product’s connection to the urban-rural divide. Click the audio player above to head the conversation. The following is an excerpt from Thompson’s book.

American whiskey actually came into being when the first stirrings of manifest destiny took hold of the American imagination and people began to move west, first to Pennsylvania and then filtering out from there. New York and Pennsylvania rye farmers birthed this national tradition. They were farmers who wanted to stay on their land. The history of American whiskey is tied to that quest, all the way back to the first drop that rolled off the first still in the New World. It was a product, a crop, no different than cattle driven to slaughter or grain shipped to the coast. The earliest how‑to books about making booze make it clear that the grains should always be whatever the farmer had easy access to, and that it’s fine if the ratios, or even entire categories of grain, change from year to year. Whiskey is designed to be constantly evolving, to reflect the land from which it’s made, and virtually all the current rules applied to its manufacture were designed by advertising wizards and businessmen eager to protect their share of the market.

For farmers, whiskey was the only way to get full value from their crops. Not everyone had access to markets and distribution methods, so to feed their family and keep their land, a man sought to do something with the surplus of a harvested crop. The dominant crop at the time was rye. They were spending time and money carefully planting and growing rye, and saw no point in watching that money rot before their eyes.

So they turned rye into whiskey.

What happened next would send ripples into the American future that we’re still dealing with today: it began with a man who’d become the subject of a huge Broadway musical and ended with Jefferson’s Republican Party replacing Washington’s Federalist Party. The American Revolution earned the country its freedom but cost incredible amounts of money, most of it paid for by state-financed debt. Treasury Secretary Alexander Hamilton wanted the federal government to assume that debt and impose a sizable whiskey tax to help pay for it. He saw it as a sin tax, ignoring the economic realities of rural life that led to whiskey’s distillation in the first place. It wasn’t the first time a city dweller didn’t understand life in a world different from his or her own.

George Washington, who made whiskey at Mount Vernon, knew different.

He opposed the tax at first, but a listening tour through Virginia and Pennsylvania in 1791 persuaded him. Congress passed the bill. And then, to use academic historian language, the farmers and distillers of Western Pennsylvania, the frontier at the time, went batshit crazy. This was the first bubbling of the Tea Party Movement, the anti‑government strain that continues to exert great control over American politics. The new sin‑tax law punished farmers who needed to make whiskey to maintain value, which meant that the farther away from the seats of power a man lived, the more likely he was to be hit by this tax. And the large distillers used their influence to keep the bill from crushing their businesses; they paid six cents per gallon and accrued substantial tax breaks. Small distillers paid nine cents per gallon.

The revolt that simmered and ultimately forced Washington to send in troops is now known as the Whiskey Rebellion. Until it was quelled, real fear existed that it could turn into a second revolution. Washington himself rode at the front of his army. Mitenbuler describes the Founding Father as tired and weary, with his steel dentures cutting into his gums. You can just see a haggard old man who wants to return to his farm, put down his guns, and age and rest and die in peace.

President Washington won the rebellion and strengthened the power of the federal government, but in the process the major debate in American public life was cemented, baked in, really. Nearly every political and cultural flashpoint we’ve experienced since is descended from this divide. Hamilton favored concrete and tall buildings and Wall Street, where he’s buried, while Jefferson favored Main Street and the dirt of the rural America in which he’s buried. Violence and discord over Hamilton versus Jefferson remain the greatest threats to the health of our experiment in democracy.

At the time of the Whiskey Rebellion, the Ohio River Valley produced the vast majority of America’s whiskey, nearly all of it rye. Today, Kentucky produces the bulk of America’s whiskey, nearly all of it bourbon. This switch seems random and complicated and yet it is actually quite simple. The farmers and distillers ran from the tax man and the long arm of the feds, looking for a piece of land where they might make their stand.

In Kentucky, the land was perfect for corn—four times the yield per acre than Maryland, according to Reid Mitenbuler, author of the book “Bourbon Empire” — and so the farmers naturally grew corn. The same laws of supply and demand that created whiskey followed the farmer‑distillers from Pennsylvania to Kentucky. They faced the same existential challenges. Without modern supply chains, and because they were living on the edge of civilization, the farmers still couldn’t monetize all of their crop before it rotted. So just as their forefathers did in Pennsylvania, they needed a way for their corn — and for their pigs — to hold value. Cured hams came from this need. And so did bourbon. Soon whiskey was traded as a currency, avoiding government notes and any taxes associated with them, which is why the IRS has long been obsessed with chasing down moonshiners and bootleggers. To Kentuckians, that is a federal war on working rural families, no matter what it’s called in Washington.

Excerpted from “PAPPYLAND: A Story of Family, Fine Bourbon and the Things That Last” by Wright Thompson. Copyright © Wright Thompson, 2020. Published by arrangement with Penguin Press, a member of Penguin Random House LLC.