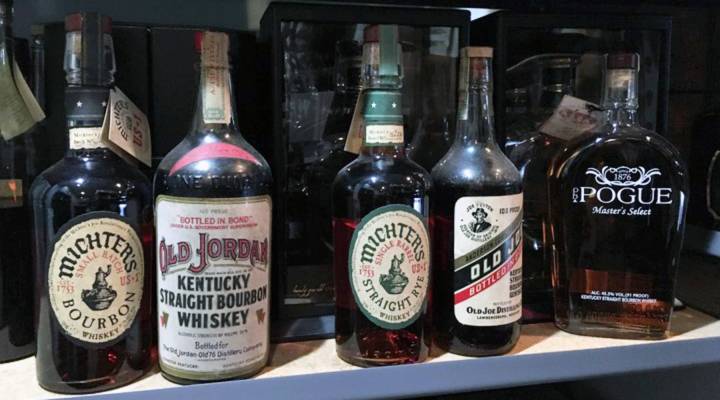 Bourbon, America’s only “native spirit,” has been riding a wave of popularity like it hasn’t seen in 50 years, driven by a combination of savvy marketing and a resurgence of cocktail culture.

Bourbon has become so popular that many of its most precious labels have become nearly impossible to buy at the retail level. That is, most liquor stores don’t carry them, and the few that do are only given an allocation of a few bottles per month. This has lead buyers to seek out their whiskey on secondary markets.

In the meantime, distilleries are trying their best to play catchup as demand continues to shoot upward.

“We’ll fill more barrels this year then we have since 1976,” said Kris Comstock, brand manager at Buffalo Trace Distillery in Frankfort, Kentucky.

And some of Trace’s most sought after brands, such as George T. Stagg (retail price: $80), or Pappy Van Winkle 12 year (retail price: $60), are now selling for north of $500 on the secondary market.

But while retail prices have increased incrementally, they’re nowhere near prices commanded on the black market.

“I mean, it’s flattering,” Comstock said, “but we don’t want to jack up the price just because the popularity of some of these brands is high today. We want to be fair.”

But fair isn’t a factor on the black market. And while it’s illegal to sell alcohol without a license, thousands of people do it. People like a guy we’ll call “James.”

James said he initially joined the groups as a way to find particular bourbon labels that he couldn’t find in his home state. Plus, it’s kind of a fun community, he said. But other people have different motivations — these are what folks in whiskey circles call “flippers,” people who go from store to store snapping up rare bottles and then selling them online at a huge markup.

“I’ve seen people taking pictures, sitting in their car. They’ve had the bottle for five minutes, and they’re already posting it up [online],” James noted. “They could care less.”

In addition to Facebook, other places to buy and sell bourbon include Craigslist, and Reddit. And while James said he didn’t get into the black market to make money, he’s not necessarily opposed to it either.

“If I walked into a liquor store and there was a retail bottle, and I knew I could sell it for 10 times what I paid for it, it wouldn’t be a hard decision to do,” he said.

These black and markets are creating havoc up and down the whiskey supply chain. Distillers don’t like them because they don’t see the profits from the secondary markup. Stores aren’t happy either because they’re the ones dealing with frustrated customers who can’t buy the whiskey they want.

Stephen Shackleton runs Shorewood Liquors just outside Minneapolis, a shop whose motto is “we were doing bourbon before it was cool.” The scarcity of popular labels at the retail level has led to competition for limited allocations from the distributors.

Most of these bourbons would sell for well over $1,000 on the secondary market.

“Seven liquor stores in this particular market have actually requested to take my allocation away from me, and to give to them,” Shackleton said. “That’s how bad it is, it is kind of funny actually, but it’s not funny to me. This is my livelihood.”

When Shackleton’s store does get a rare label, say a bottle of Pappy Van Winkle 20, which retails at $125, Shackleton said he has a special condition before he’ll agree to sell.

Of course, bourbon’s history with the black market goes way back to Prohibition. Still, it’s not illegal to sell or drink now, so what’s driving so much unmet demand?

After all, it’s not like distillers can travel back in time to put more bourbon in barrels to meet demand today. So, for now, we have is a classic supply shortage, just like we often see with commodities.

“A distinction here,” Garthwaite said, “is that we don’t have one basic source where you would trade these on some type of commodities market, which is what you have for a lot of these other products.”

Bill Thomas is the owner of Jack Rose Dining Saloon in Washington, D.C., a place where enthusiasts regularly fork over a couple hundred dollars for a single ounce of super rare bourbons.

“You know, we’ve been fortunate enough to buy a lot of that stuff along the way over the last decade or so and see increases that are just beyond what we ever thought they would be,” said Thomas as he walked through some of the thousands of bottles he keeps in his private collection.

He has bottles from long-gone distilleries, Prohibition whiskies, single-barrel labels — the kind of stuff most bourbon collectors would give their eyeteeth for.

Still, gesturing at the bottles on his shelves, even these bottles will eventually be drank.

“I think that’s the way the average whiskey drinker is. I think that when you get real enthusiasts together who love bourbon, the cost just goes out the window at that point,” he said with genuine enthusiasm.

“Hopefully you bought it long enough ago that you forgot what you paid for it,” he quipped.

The good news for those of us regular bourbon drinkers, there are still plenty of bottles under $100 that can hold their own with the Pappy Van Winkles of the world, even if they aren’t as rare.