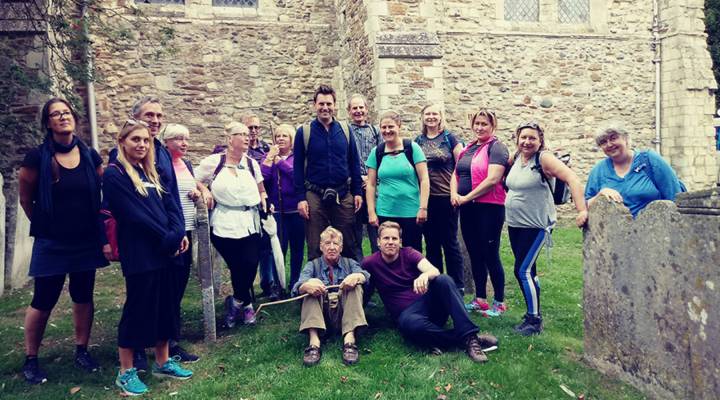 COPY
A group of pilgrims resting among the gravestones outside of St. Mary's Church in Rye at the end of their journey.  Stephen Beard/Marketplace

A group of pilgrims resting among the gravestones outside of St. Mary's Church in Rye at the end of their journey.  Stephen Beard/Marketplace
Listen Now

The ancient practice of making pilgrimages — which began to dwindle in Europe after the Reformation — has staged an extraordinary comeback in recent years. Most spectacularly, in France and Spain. Since the 1980s the numbers beating a path to the famous shrine of St. James at Santiago de Compostella in northwest Spain has grown by 12,000 percent.

Today more than 300,000 people walk along the 477-mile route each year, pumping some $350 million into the rural economies they pass through.

Now there’s a drive underway in Britain to revive the practice there and an organization called the British Pilgrimage Trust, or BPT , has been formed to promote the activity.

Marketplace joined one of the Trust’s one-day pilgrimages to savor the experience of “walking slowly with strangers in the direction of a religious landmark.”

A group of fifteen latter-day pilgrims — led by Guy Hayward, co-founder of the BPT — made the seven-mile journey, walking from St. Nicholas Church in the village of Icklesham in East Sussex along the coast to the medieval hilltop town of Rye.  Hayward — a classical singer — entertained the group with ancient hymns, anecdotes and snatches of history about the route.

Guy Hayward, the leader of the pilgrimage group, at an ancient wishing well along the route.

“This is a small section of the Old Way, a 250-mile pilgrimage path stretching from the port of Southampton up to Canterbury,” he told us. “For centuries, pilgrims from all over Europe arrived on this coast and walked along here to visit the shrine of the second most popular saint in Christendom, Thomas Becket.  More European churches have been dedicated to St. Thomas than anyone else, apart from St. James.” Now that the route to St. James’s shrine in Santiago de Compostela has achieved international recognition, Hayward wants to focus attention on the Old Way and he would like to see the habit of making pilgrimages catch on in Britain.

“I love it,” said one of the walkers, Jackie Norton, an entrepreneur, who’s on her third pilgrimage “You walk along, and you get to a church. And you chant. You know. It’s marvelously mad … but very freeing. It’s very different.  It’s just a lovely day out, isn’t it?”

Guy Hayward’s concept of pilgrimage is fairly elastic: it’s not an exclusively religious affair. And proving the point, along the route, we found a secular shrine.

“We’re just approaching Paul McCartney’s recording studio which is in there,” Hayward pointed to a small windmill on the crest of a hill, overlooking the sea. He whispered, almost out of reverence for the star.

In that spirit, the pilgrims sang the Beatles hit “Let It Be” before moving on.

BYOB or Bring Your Own Beliefs is the first rule of this pilgrimage. People of all faiths and none are welcome and, according to the BPT’s statistics only 30 percent of attendees are avowed Christians, 20 percent describe themselves as atheist.

The whole experience of the walk from Icklesham to Rye was a curious mixture: Christian worship, nature walk and New Age healing. There was tree-hugging, berry-picking, making wishes at a medieval well, and picnicking in a cemetery next to the grave of a famous British comedian — Spike Milligan, his headstone bearing his self-penned epitaph “I told you I was ill!”

We wandered across glorious, undulating English countryside, past grazing sheep and through marshland with a balmy breeze whispering in the reeds. Pilgrim Theo Clarke — the boss of a London-based charity — was delighted with the day.

“I’m not actually a very religious person but I thought this was a really good way to learn about British history, to see the countryside, get out of London, get a touch of our history and our heritage, and to meet some new people,” she said.

The pilgrimage ended at St. Mary’s church at the top of a cobbled lane in the town of Rye. As a farewell, Hayward sang an 800-year-old hymn in Old English. He doesn’t expect his pilgrimages will have the same economic impact as the one to Santiago but he hopes he can at least spread the word about the benefits of pilgrimages. One of the purposes of those holy expeditions in the past was to earn absolution for one’s sins, to gain remission of the final sentence, have a few years lopped off the time you might have to spend in Purgatory. There’s no way of knowing — yet — whether the walk from Icklesham to Rye has had that effect. But it did not feel in any way like a penance. It was terrific fun. And the pilgrims left Rye, unshriven maybe, but happy.