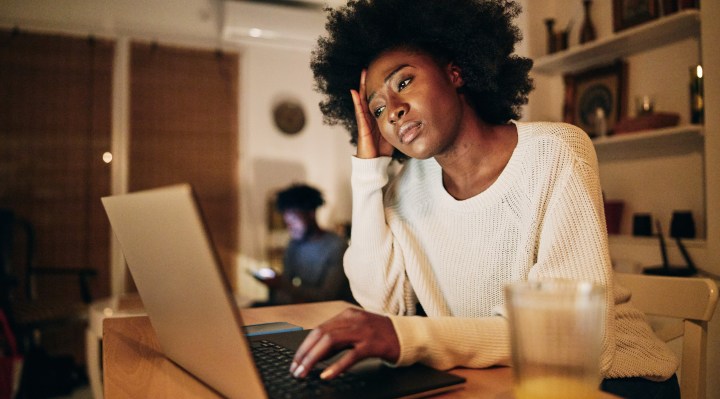 COPY
During the pandemic, women's labor-force participation declined to the lowest level since May 1987. FluxFactory via Getty Images

During the pandemic, women's labor-force participation declined to the lowest level since May 1987. FluxFactory via Getty Images
Listen Now

The Labor Department’s jobs report for April found that more than 4 of every 10 (43%) unemployed Americans were “long-term unemployed,” meaning they had been out of work and actively looking for 27 weeks or longer. That rate is comparable to the high levels seen in the years after the Great Recession.

Women are bearing substantial burdens from both long-term unemployment and the struggle to return to the workforce after being laid off or leaving their jobs to care for family members or home-school their kids. According to Bureau of Labor Statistics data, women’s labor-force participation has declined 1.7 percentage points during the pandemic to 56.1%, the lowest level since May 1987. Women’s employment has fallen by 5.2 percentage points since March 2020, compared to a 4.8 percentage point decline for men.

Getting women back to work will require a lot of pieces to fall into place — from fully open schools, preschools and day cares to the right kinds of employers and jobs.

Marta Mirecki of Washington, D.C., has spent the last year confronting the effects of long-term unemployment.

Her narrative starts as a love story between her and her job making booze — the technical term is “distilled spirits.”

“It was crazy — I was a distiller,” Mirecki said. “I was mashing grain and driving forklifts and filling bottles. It was amazing, and I loved it.”

That is, until she was laid off in March 2020 at the start of the pandemic. Like nearly 4 million women who were working before the pandemic, Mirecki doesn’t have a job now.

Mirecki is 48, with a 15-year-old daughter and a 13-year-old son. Her husband works for the Defense Department. In the mid-2010s, when the kids were elementary-school age, his job took the family to Japan.

“While we lived there, I did some part-time work,” Mirecki said. “Same kind of thing I did in the U.S. when the kids were little: I taught cooking classes — I’m a trained chef — and I worked as a personal chef.”

When the family returned to the U.S. in 2019, Mirecki got down to looking for a full-time job. “I was driving past a distillery, and I thought — ‘Hey, that’s really cool,'” she said. “My undergraduate degree is in chemistry and I went to cooking school, and I thought, ‘I could do distilling.’”

And she landed a job at a distillery, making rye, bourbon, gin and vodka. But about six months later, she said, “March 2020 came along. Restaurants and bars started closing down, the distillery took a hit, laid off three of its nine full-time employees, and I was one of those three. I’d been working 50 hours a week. It was a shock. I didn’t see it coming.”

Mirecki didn’t qualify for unemployment benefits because she hadn’t worked long enough before her layoff. Eventually, she found a job at another distillery, making hand sanitizer, but was laid off again.

“I applied for a bit to jobs, and it didn’t go well,” Mirecki said. “So I decided to take a step back from the job search. And I heard about a local food bank that needs help. So I’m doing that with my time now, two days a week. And it’s great because these are people who need help. And I have time.”

A lot of women who are out of work have time now — to volunteer and to school and care for their kids. About 2.8 million women have left the labor force since the pandemic hit in March 2020, compared to 2.4 million men.

“Women at all stages of their careers — younger women who are just entering the workforce for the first time, midlevel careerists and CEOS — are all struggling,” said C. Nicole Mason, president of the Institute for Women’s Policy Research. “One year out of the labor force for women at age 30 can cost nearly $110,000 over a lifetime,” Mason continued, citing research by the Center for American Progress quoted in a recent IWPR report on long-term unemployment. “It has a definite impact on their future earnings, their career mobility and whether or not they can actually reenter the workforce. The longer you’re out of the workforce, the harder it is to get back in.”

It’s been eight months since Marta Mirecki was laid off from her second distillery job in the pandemic. And she recently shared news about her family’s plans: “We’re moving to Singapore next month,” she said. “My husband’s work is taking us there.”

So she’ll have another chance to get back into the job market, and face another challenge.

“I’ve got a very eclectic resume. I’ve done a lot of odd things,” Mirecki said. “I don’t look back and think, ‘I wish I’d stayed in the Navy 20 years ago,’ or ‘I wish I’d stayed in telecom.’ But I can’t help but feel that I’ve kind of run out of options. People are not killing themselves to hire overeducated, underemployed 48-year-old women. They’re just not.”

Mirecki said she’s trying to stay positive as she contemplates her next career move. She’s hoping to stick with distillery work and possibly pursue a master’s degree in food science once she gets to Singapore. “I’ve got the science,” she said. “I’ve got the passion for taste and for food. I feel so lucky that I’ve gotten to do it at all.”