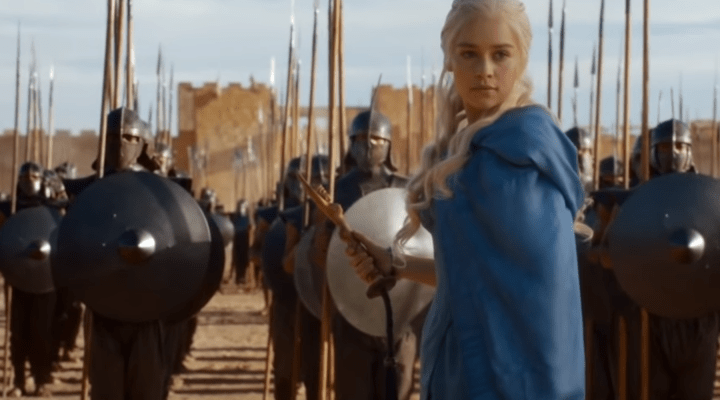 If you’ve ever wanted to command a dragon, there’s a course that’ll teach you how.

Duolingo, the free language-learning app and website, has helped millions of people around the world learn new languages. Two of them, fictional ones: High Valyrian from HBO’s “Game of Thrones,” which launched in 2017, and Klingon, from “Star Trek,” which launched last year.

Myra Awodey, the lead community specialist for Duolingo, said the company hopes its fictional languages like, High Valyrian, will be a gateway for people to learn other languages. “Maybe you pick up Italian, maybe you decide you’d like to learn French, or brush up on your Spanish that you haven’t used from high school,” she said.

High Valyrian is an ancient language in the “Game of Thrones” universe, whose few speakers include Daenerys Targaryen, the Queen of Dragons.

Valar dohaeris: “All men must serve”

“It’s not necessarily going to be something that you ever use, but it’s personal enrichment. It’s the same way that reading a novel would be. It expands your understanding of, and appreciation for, language in general,” said David J. Peterson, the linguist who developed both the High Valyrian and Dothraki languages for “Game of Thrones.”

George R. R. Martin’s book series “A Song of Ice and Fire” (on which “Game of Thrones” is based) includes words and phrases for both languages, but Peterson expanded them for the television show and the Duolingo course.

Right now, High Valyrian has grown to comprise about 2,000 words, according to Peterson. The language may be fictional, but it has its own — very real — system of rules that govern it, same as any other language.

When comparing a fictional language like High Valyrian with “non-constructed” or “real” languages, Peterson doesn’t see a distinction. “They’re both languages,” he said. “It’s exciting for anybody to be learning a language for any reason.”

What it takes to create a fictional language

For each language, Duolingo has rows of skills that teach users parts of speech and vocabulary. Luis von Ahn, Duolingo’s chief executive, told Marketplace that the platform functions like a video game. Users can accumulate experience points and snag badges for certain achievements, like completing all of the skills in a course or using the platform multiple days in a row.

For High Valyrian, the course has sections on how to use the present, perfect and future tenses. (Peterson plans to add lessons that will include the imperfect and past-habitual tenses.)

Compared to developing a course for a real language on the Duolingo, one key difference is that High Valyrian has only one primary expert (Peterson) who’s fluent in it. “For languages that have a decent amount of speakers, and even experienced educators, you can rely on maybe a team of five or 10 language experts,” Awodey said.

Awodey added that while there are a lot of “Game of Thrones” fans on Duolingo’s staff, that is not detracting from the development of other important languages. “We actually recently began a campaign to work on endangered and indigenous languages. So we do, as of recently, have a Hawaiian and a Navajo course,” she said.

To create High Valyrian, Peterson drew from George R.R. Martin’s material, dictionaries, and his own experience as a language creator and linguist. “It helps to look at the etymologies for different words, whether they’re from English or in any language, to get a sense — especially for complex or abstract words — for how other humans came up with words for these concepts,” Peterson said.

Grammatically, it might remind you of, say, Latin, Ancient Greek and Russian, Peterson said. In other ways, he noted, it bears similarities to Turkish and Japanese since it’s primarily a “head-final” language (adjectives usually come before the nouns they modify).

Peterson said the difficulty level will depend on your native language. “For English speakers, I might say it’s probably about as difficult to get into as Russian — with less idiomatic stuff to learn for the very, very specific reason that we don’t know a lot about the culture of those who spoke High Valyrian,” he said. “It is kind of still a secret that’s yet to come in the books.”

Prior to the course’s official launch in 2017, Peterson said he had been working on the course for at least half a year, and that he’s been working on it continuously since then. As for how many hours he’s currently devoting toward updating the course, Peterson wouldn’t reveal the number.

“I honestly probably shouldn’t say, because it’s embarrassing. I have so many other things that I need to be doing,” he said, laughing.

Menaka Kumar, an 18-year-old “Game of Thrones” superfan from Raleigh, North Carolina, decided to try learning the language late last year. “The course is pretty much the exact same as learning a new real language, which I think is so interesting,” she said. “I would love to continue learning and encourage my friends so we can converse in a totally made up language.”

Alison Emmert, 32, from Oviedo, Florida, also decided to give it a shot since she’s a big “Game of Thrones” fan and enjoys learning new languages. “It’s not something that’s very practical, obviously, but it’s fun,” she said.

One aspect that she found challenging was the pronunciation of some of the words. “It has rolled Rs, like Spanish, that my American tongue just can’t get right,” she said.

Peterson is still making updates to the language and hopes to complete them by the time the final season of “Game of Thrones” ends, or at least by the end of the year. “I certainly do hope that those who have taken the High Valyrian course enjoy it, and I appreciate their patience as I continue to work on it and finish it up,” he said. “It’s been a wild 10 years working on ‘Game of Thrones,’ and I look forward to seeing what happens in the universe.”

Click the above audio player to hear our interview with Duolingo CEO Luis von Ahn.