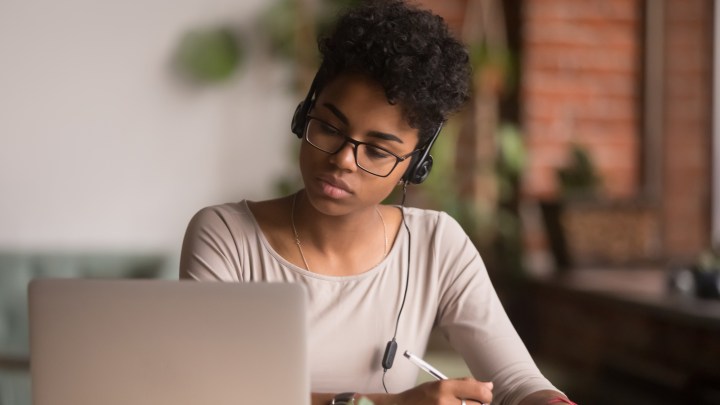 COPY
People stuck at home during the pandemic are using their time on productive projects, like learning a new language. Fizkes/Getty Images
COVID-19

People stuck at home during the pandemic are using their time on productive projects, like learning a new language. Fizkes/Getty Images
Listen Now

With many parts of the country seeing spikes in coronavirus cases, reinstituting lockdowns in some form or fashion, a lot of people are stuck with time to fill. Many want to use that time to be productive, maybe learn a new language.

That’s what the folks working for language learning apps are noticing.

So with growing competition for users, developers are trying new ways to engage folks. Duolingo’s bid for more ears is a bilingual true-crime podcast.

The story is about a bank heist in Buenos Aires, Argentina, in 2006.

“We knew that true crime was just such a popular genre,” said Michaela Kron, a spokesperson for Duolingo who worked on the podcast.

“We were trying to think through, really, how do we adapt this unique format that we’ve created for language learning, and adding this true crime element to kind of cross those over,” she said.

Clearly the pandemic presented an opportunity to grow the business. As lockdown orders came into place around the world in March, Kron said Duolingo saw a 100% increase in new users.

Erik Linthorst has been trying to learn Spanish for about three years now.

Linthorst said he used to use Duolingo quite a bit, but ran out of free content a while ago. The app is free, but you can pay for a subscription to unlock more stuff.

He’ll probably check out the Duolingo true crime podcast — as long as he doesn’t have to pay for it — but said there’s so much good free content on the internet already.

Shawn Loewen, professor of second language acquisition at Michigan State University, said language programs tend to overpromise, whether you’re paying or not, but the long-form narrative might work.

“Any exposure to the target language is good,” he said. “If you understand the larger sense of things because part of it has been told to you in English, and then you hear something in Spanish, you’re more likely to understand that because you’re able to kind of fill in with some of your other background knowledge.”

Especially when it comes to vocabulary and simple phrases.

Loewen said straddling the line of entertainment and education is something these apps do well, but whether you’ll be ready for that trip to Barcelona in 2022 is another question altogether.