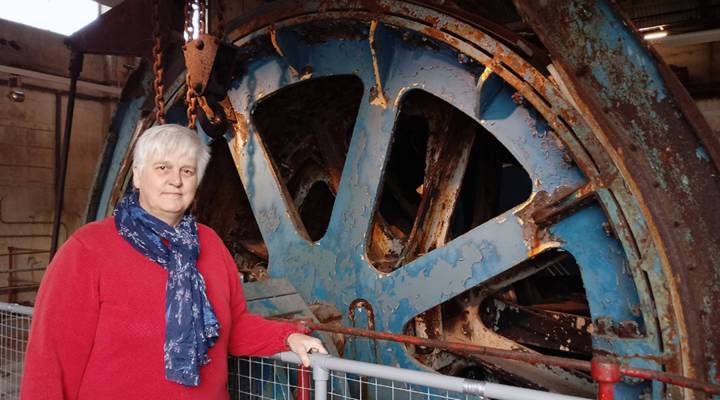 COPY
Loveday Jenkin, a leading Cornish language campaigner – standing next to the winding gear from a traditional Cornish tin mine. Stephen Beard/Marketplace

Loveday Jenkin, a leading Cornish language campaigner – standing next to the winding gear from a traditional Cornish tin mine. Stephen Beard/Marketplace
Listen Now

Could one of the casualties of Brexit be the Cornish language? Much older than English, it is an offshoot of the Celtic tongue that was spoken across Britain when the Romans arrived in the first century B.C., and was driven to the periphery of the country after the Anglo-Saxon invasions began in the fifth century. Cornish is now spoken regularly by only a few hundred people in Britain’s most southerly county of Cornwall. But it has been making a comeback in recent years, some say, thanks to the European Union. Could that renaissance be in jeopardy?

“Brexit is a setback” said Loveday Jenkin, a leading campaigner for Cornish. “EU funding enabled us to set up a Cornish language office to raise the profile of the language above being part of a subculture of a few people to something that is integral to the identity of Cornwall.” The EU funding has helped finance language classes, a translation service and even bilingual street signs in English and Cornish.

Jenkin and other language campaigners do not expect the British government to funnel cash into Cornish culture after Brexit to make up for any short fall from the EU.

“You can’t expect English people to see any value in the Cornish language,” said teacher and poet Paul Hodge. “They only think about Cornwall as a place to take a holiday. They just don’t care about us. The rest of the EU does care about us,” he said.

But could Britain’s private sector ride to the rescue? Other advocates for Cornish argue that there is a good commercial case for supporting the language. As a poor but scenically beautiful county, Cornwall is utterly dependent on tourism; having its own unique language could help in the marketing.

“It’s a way of branding and promoting Cornwall, both in the U.K. and internationally, as a place apart,” claimed Garry Tregidga, head of the Institute of Cornish Studies.

Business is beginning to get the message. A local ice cream company is already using the language as a marketing tool, employing English and Cornish in its TV ads that have been aired across the U.K. Jenkin said that money is starting  to trickle in from corporate sponsorship, too.

“Business is starting to realize the value of the language and starting to support it a bit. With the decline in government and taxpayers’ money, the language community is looking  more to business to help support things that we’re doing,” she said.

While she laments the loss of public funding, Jenkin and the other enthusiasts for Cornish are confident that their language will not die.

After all, it has survived the Roman conquest, the Anglo-Saxon invasion and the suffocating dominance of English. But it’s still alive and adapting. It’s even coined a word for the latest threat: “Bretonborth” – the Cornish for Brexit.