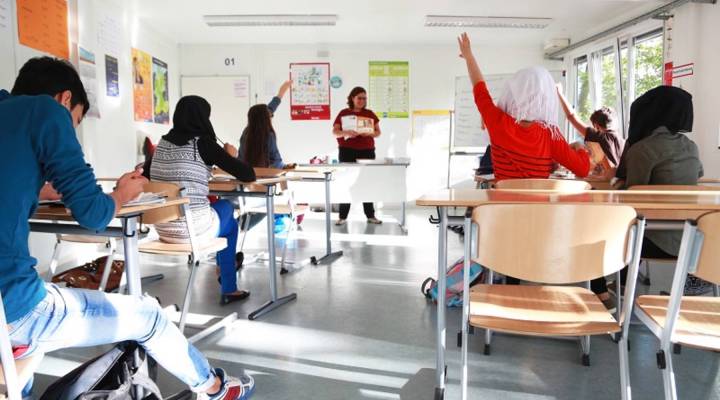 COPY
Teacher Susann Heida is in her first month teaching German to teenage refugee students at a Berlin public school. Students in her class come from Syrian, Afghanistan and Iraq. Veronica Zaragovia

Teacher Susann Heida is in her first month teaching German to teenage refugee students at a Berlin public school. Students in her class come from Syrian, Afghanistan and Iraq. Veronica Zaragovia
Listen Now

Germany has accepted about 240,000 refugees so far this year, and one way it is trying to help them adapt to their new culture is by teaching them German.

Berlin offers intensive German lessons to refugee students in public schools. About 12,000 kids are learning the language, more than double the number who enrolled last year.

This influx of students means German language teachers are in hot demand.

Teachers like Susann Heida, who is in her first month teaching German at a Berlin public school where her students are refugees. They come from Syria and Afghanistan. One is from Iraq.

Berlin has recruited 1,100 new teachers for this school year and that’s enough for now, but thousands more refugees will be taking these classes over the next couple of years.

Schools will need more teachers like Heida, who left a freelance job teaching adults to teach young refugees full time. “Working in a public school is secure — insurance is paid, taxes are paid and you have the net income that comes in every month,” Heida said.

She also switched because she wanted to help these kids learn a tough language.

Mark Rackles, Berlin’s secretary of state for education, wants other teachers to know this is fulfilling work.

“I think it’s a fascinating task and it’s something you can help people with and to have a job that’s fun,” Rackles said.

Berlin is not just the capital — it’s one of Germany’s 16 federal states. Each state has to figure out teacher recruitment on its own.

Rackles has been hearing concern from adult education institutes about losing teachers to K-12 public schools. Still, not all teachers are jumping ship.

“Well, I must say I prefer not to do it,” said Wolfgang Schmidt, a freelance German teacher in Berlin. He said he likes having students who know some of the language.

“I didn’t want to do this to let’s say teach someone the German alphabet, and teach them single words from scratch,” he added.

This is tough work. Refugees often need emotional support and teachers are learning as they go. To help qualify more German language instructors, universities here are expected to come up with courses for them. 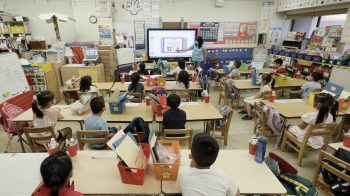