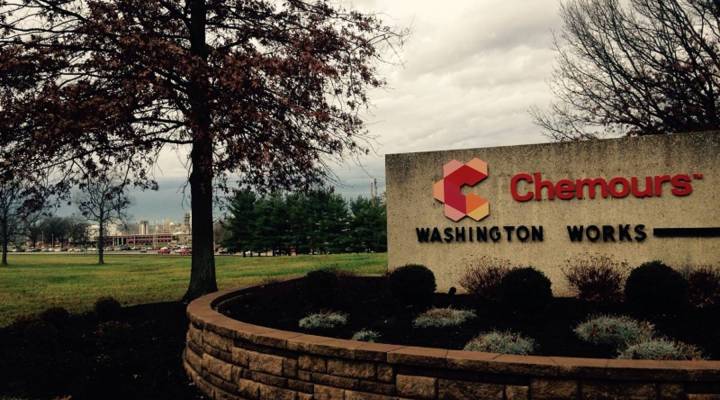 COPY
State agencies in West Virginia estimate DuPont was one of the top five private employers in the state until 2006. Today it’s dropped to 40th, and a major portion of the company has been spun off into a new company called Chemours, the stat'e's 36th largest employer.  Glynis Board

State agencies in West Virginia estimate DuPont was one of the top five private employers in the state until 2006. Today it’s dropped to 40th, and a major portion of the company has been spun off into a new company called Chemours, the stat'e's 36th largest employer.  Glynis Board
Listen Now

Dow Chemical and DuPont announced plans to merge late last year in a deal worth about $130 billion. Both companies have long histories in West Virginia, where they’ve been top employers in the so-called “chemical valley.”  They used to compete, but now they are allies in what some West Virginians say feels like the continued death of the Industrial Age in the region.

The merger means 10 percent job cuts across DuPont, but a fear of more job losses is only one concern for West Virginians. Some people are also concerned the company won’t clean up a chemical mess it made over the last half-century.

“Everyone thinks it will always be the same. And it’s not,” said chemist Jerry Moraczewski, a DuPont retiree.

Moraczewski worked for DuPont for more than 30 years. He said he was forced to retire in 2009. Still, he defends DuPont saying cutbacks are what companies like DuPont have to do to survive. Moraczewski now lives in Pennsylvania, but he maintains contact with former colleagues in West Virginia. He says many of those friends are worried about what comes next.

Jerry Moraczewski remembers when baseball fields like this one were filled with neighborhood families 20 years ago. Today, it’s abandoned.

The company’s presence in West Virginia has been shrinking in the last couple of decades. Today, the state estimates it’s the 40th-largest private employer in the West Virginia.  But back in the day, it was in the top five, providing well-paid jobs that didn’t require advanced degrees.

“There was a time when you didn’t talk about DuPont. Largest employer in Wood County,” said Larry Dale, a school bus driver and retired preacher in Washington, West Virginia.

Even today it’s tough to find someone in the area willing to talk openly about DuPont. The Dales agreed to talk partially because they don’t have any direct connections to the company, unless you consider their property line. “If you look out the north side of the house, you can see the rim of the [DuPont] dump. I’m gonna call it a dump. They would prefer that I didn’t. But that’s what it is. It is a dump,” Dale said.

A decade ago it came to light that DuPont contaminated municipal water sources in this region with a chemical that’s used to coat non-stick cookware.  It voluntarily phased out manufacturing and use of the chemical. Last year an Ohio woman who developed cancer won a $1.6 million judgment against the company. DuPont plans to appeal, and has argued that the company “acted reasonably and responsibly.”  Some 3,500 similar lawsuits are pending.

“Everybody has kind of considered the DuPont to Dow acquisitions to be a way of either escaping corporate responsibility, or reinforcing themselves for the liabilities that are out there,”  Dale said.

Larry and Susan Dale live next to a DuPont landfill. In the wake of a Dow DuPont merger, they worry about DuPont’s environmental legacy.

Susan Dale said they live in the shadow of this chemical giant. “And if the shadow had a shape,” she added, “it would be a question mark.”

In an email, a DuPont spokesman, Dan Turner  said DuPont remains committed to fulfilling all legal and environmental obligations.

Despite environmental concerns, many people here would welcome DuPont back.  Amid all the uncertainty, there’s still hope a merged Dow/DuPont could expand business. Associate professor at West Virginia University’s College of Business and Finance, Ashok Abbott, points to shale gas in the region as an alluring business incentive. “We should be looking at the next generations of their plants, not the existing ones,” Abbott said.

Many business leaders in West Virginia and the surrounding region are working hard to find ways to compete with Gulf States for future chemical and plastic industries.