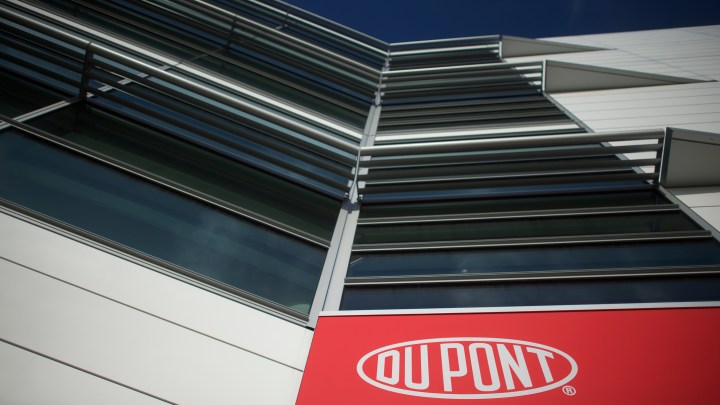 A corporate dispute over environmental cleanup liability — now made public through documents unsealed in state court — has residents near a historic DuPont chemical plant worried if any company will, in the end, clean up their soil and water.

Two years ago, New Jersey pharmacist Robin Andrews’s life changed. She’s in her late 50s and has lived her whole life in and around a giant chemical facility run by the DuPont company on the banks of the Delaware River.

“I went out to the mailbox and there was a letter from an engineering firm,” Andrews said. “It explained to us that they suspected there was a possibility our water contained hazardous substances.”

The fear: toxins in the well water that Andrews, her husband, her son, and numerous dogs and horses had been drinking for decades. Subsequent tests on her wells found contaminants at dangerously high levels.

“They did say it was Teflon-related chemicals,” Andrews said.

“They did say it was Teflon chemicals“

“Teflon chemicals” is shorthand for a family of compounds used to manufacture an array of products including nonstick pans, rain jackets, waterproof shoes and microwaveable popcorn bags. The compounds are known as fluorinated chemicals and go by names like PFOA and PFOS. Now, these compounds are linked to certain cancers and a thyroid disease that Andrews has.

“There’s been a long history of problems, running jokes about ‘DuPont Disease,'”Andrews said, “but I don’t think anybody had any idea this was happening to the extent it is.”

Andrews grew up next to DuPont’s historic Chambers Works plant in southern New Jersey, right next to a bridge connecting to the Wilmington, Delaware region. The federal Environmental Protection Agency has found contaminated groundwater and soil in the area, and DuPont in 2008 notified New Jersey regulators that its groundwater monitoring wells were contaminated.

By one estimate, the environmental cleanup in and around Chambers Works — finding, removing and filtering out dangerous chemicals from the soil and water — could cost $1.1 billion.

But many nearby residents fear that corporate maneuvering could leave no cleanup money.

Teflon, the material in nonstick pans, was invented in 1938 at Chambers Works, and was introduced to the market a decade later.

DuPont, in fact, came up with several notable inventions at Chambers Works.

“It started with gunpowder back in the early 1900s,” Kenneth Brown, mayor of nearby Carneys Point township, said. “During World War II they were part of the Manhattan Project, which was the atomic bombs. They also invented nylon down here. They also invented Kevlar, Teflon production and all kinds of other chemicals and additives.”

All this production in the past century has created waste, and for decades it was not illegal to dump waste into nearby waterways.

“The wastewater carrying that hazardous waste was run through earthen ditches that provided no protection against seepage into the groundwater,” said attorney Albert Telsey, who grew up in Carneys Point and represents the township in litigation against DuPont. “So that’s where it all is now, in the groundwater.”

The plant sits behind a fence and in certain sections is overgrown. DuPont, in the last generation, has shut down much of its chemical production at Chambers Works.

“The only thing that exists is what was spilled and dumped,” Telsey said.

DuPont has been pumping and treating groundwater at Chambers Works since the 1970s. And it spent more than $8 million in water filtration and cash payments to residents under a 2011 class-action settlement. But PFOA and other “Teflon chemicals” continue turning up in local water well tests at levels that exceed what state authorities consider safe.

Four years ago, DuPont created a new company, which it “spun off” in corporate parlance. The spinoff, Chemours, inherited DuPont’s performance chemicals business, but also most of the parent company’s pricey environmental cleanup responsibility.

Chemours assumed as much, according to documents in a confidential lawsuit just unsealed in state court. Chemours, the plaintiff, argued that parent company DuPont’s estimates of environmental liabilities loaded onto Chemours were low-balled and “systematically and spectacularly wrong.”

“You jumped ship and left the mess here for us,” local resident Katherine Smalley said of DuPont.

In the suit, Chemours argues DuPont should not be “indemnified,” or protected, from environmental liability at various corporate chemical sites. “The Indemnification Provisions should be deemed unenforceable,” the Chemours complaint states.

DuPont, in response to a request from Marketplace, referred to a company statement: “We believe the claims made by Chemours are without merit … The process of allocating liabilities to Chemours was conducted as part of a standard spinoff practice; liabilities were evaluated and assigned with the help of independent consultants and experts in corporate valuations and solvency analysis.”

All this corporate infighting leaves some local residents furious.

“I think it’s just a big stall tactic,” said John Bibeau, a member of the Carneys Point planning board, “to just create more documents, more legal filings, and just keep pushing and kicking the can down the road.”

Chemours, in response to a request, shared a statement: “Chemours believes the language in the lawsuits speaks for itself. The only statement we will have on the matter at this time is that we believe the legal action we have taken in Delaware Chancery Court is the best interest of all Chemours stakeholders.”

At Chambers Works, Chemours has been conducting cleanup of what it calls “lingering contamination issues” dating back to DuPont’s pre-spinoff chemical production at the site.

“Chemours has engaged in a full-site environmental assessment of our Chambers Works site,” the statement reads. “In June 2016, Chemours voluntarily began a follow-up survey and sampling program for a broader set of fluorinated constituents. We expanded the radius of that program in a phased approach and now include samples up to 7 miles from the site perimeter. Between 2016 and June 2019, a total of 440 residential wells have been sampled and 150 granular activated carbon (GAC) systems have been installed on homes with elevated levels of constituents.”