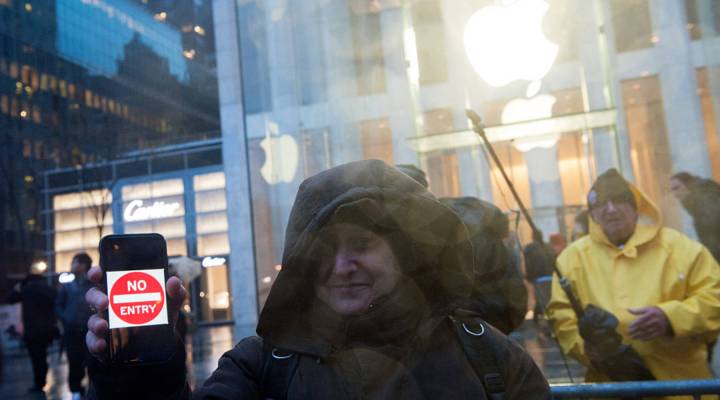 COPY
A protester holds up an iPhone that reads, 'No Entry' outside of the the Apple store on 5th Avenue on February 23, 2016 in New York City. Protesters gathered to support Apple's decision to resist the FBI's pressure to build a 'backdoor' to the iPhone of Syed Rizwan, one of the two San Bernardino shooters. Bryan Thomas/Getty Images

A protester holds up an iPhone that reads, 'No Entry' outside of the the Apple store on 5th Avenue on February 23, 2016 in New York City. Protesters gathered to support Apple's decision to resist the FBI's pressure to build a 'backdoor' to the iPhone of Syed Rizwan, one of the two San Bernardino shooters. Bryan Thomas/Getty Images
Listen Now

If you want to know how much cybersecurity sector — and encryption specifically — is booming. Just ask Matthew Green; he teaches encryption at Johns Hopkins University.

“I’ve had a hard time trying to get students to come do summer research with me, because they all get jobs… at companies like Facebook, and Google. They pretty much get snarfed up,” Green said.

His students are so in-demand because encryption security is increasingly becoming its own specialty, Green said. “There’s a lot of specific information in terms of network security, cryptography, and software security that’s extremely specialized.”

Which may be why there was word today that Frederic Jacobs, the coder who created an encrypted messaging app Signal that is preferred by none other than Edward Snowden himself, had been hired at Apple. The company, of course is in the midst of a battle with the U.S. government over access to an iPhone belonging to one of the shooters in San Bernardino, California.

Engineers with expertise in security and encryption are in demand not just by big tech companies but also by in many other sectors, including financial, healthcare and automobiles. industry. More than one million cybersecurity jobs, globally, are unfilled, according to a recent estimate by Cisco.

“The issue that you struggle with is: once you have talent that is interested in joining your organization, it’s almost a Catch 22, because you wonder why that talent hasn’t been acquired by someone else,” said Joe Loomis, CEO of the startup CyberSponse, which provides security tools to companies and government organizations.

Loomis said it takes him six to nine months to find a qualified cybersecurity expert. “It’s only going to get worse… because encryption is extremely difficult to navigate,” he said.

But as the security workforce is experiencing increased demand, so are companies that provide cybersecurity. Rod Becktrom, whose venture firm invests in cybersecurity companies, said the market is expanding.

“The awareness of boards of directors and all C-level executives of the extreme importance of cyber security… is only growing,” he said.

For much more, including our own Molly Wood’s take on the latest arguments between Apple and the FBI, click the audio player above.