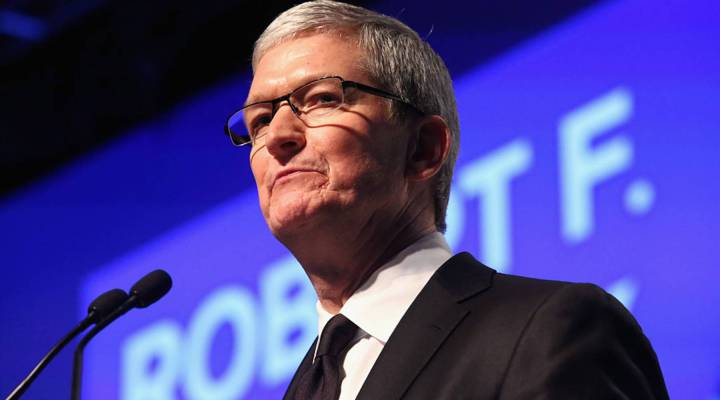 COPY
Apple CEO Tim Cook has proposed that the government take the issue of unlocking the iPhone out of court. Astrid Stawiarz/Getty Images for RFK Human Rights

Apple CEO Tim Cook has proposed that the government take the issue of unlocking the iPhone out of court. Astrid Stawiarz/Getty Images for RFK Human Rights
Listen Now

Apple is resisting the order of a judge in Southern California, now supported by a motion from the U.S. Justice Department, telling the company to bypass strong encryption on an iPhone 5c used by one of the alleged mass-killers in San Bernardino, California. Law enforcement officials want to get at data that might be stored on the iPhone, and that can only be retrieved if Apple writes new software to unlock the iphone in question. Any other law-enforcement attempt to hack the iPhone (i.e., without Apple’s technical cooperation) is likely to cause the phone to self-erase and render the data permanently irretrievable.

Today, Apple CEO Tim Cook posted an open letter on Apple’s website, calling for a “government commission or panel of experts” to explore the issues raised by powerful encryption embedded in its and other companies’ smartphones, for “law enforcement, national security, privacy and personal freedoms.” He also wrote that the government should drop its effort to compel Apple to break into the San Bernardino iPhone.

Peter Swire, a computer-privacy expert at the Scheller College of Business at Georgia Tech who served on the Obama Administration’s NSA review panel, said that if such a commission were to be established and recommend legislation, the process could succeed — in spite of partisan divisions and lack of progress on many issues in Congress.

“Legislation has a chance of passing when both sides have something to lose,” said Swire. “Government is risking being told it can’t move forward. Apple is risking being told it has to make software changes it doesn’t want to make. So government and Apple may have a middle ground where they can agree to some sorts of government access, while still keeping cyber-security strong.”

The alternative path — letting this issue continue to be adjudicated by the courts, possibly ultimately by the U.S. Supreme Court — is not sensible, said Daniel Weitzner, director of the MIT Internet Policy Research Initiative and a former official in the Obama White Hosue dealing with technology policy. Weitzner said the current process isn’t likely to satisfy law enforcement’s legitimate need to investigate suspects and international bad actors, nor to satisfy major U.S. technology companies, whose reputation for protecting customers’ data and privacy from intrusive governments and hackers is at stake.

“You have a question of significant technology policy, privacy policy, international competitiveness, being decided by one court sitting in Southern California,” said Weitzner. “I don’t think it’s really appropriate for courts to be making these kinds of policy decisions.”

Are iPhones the new burner phone?