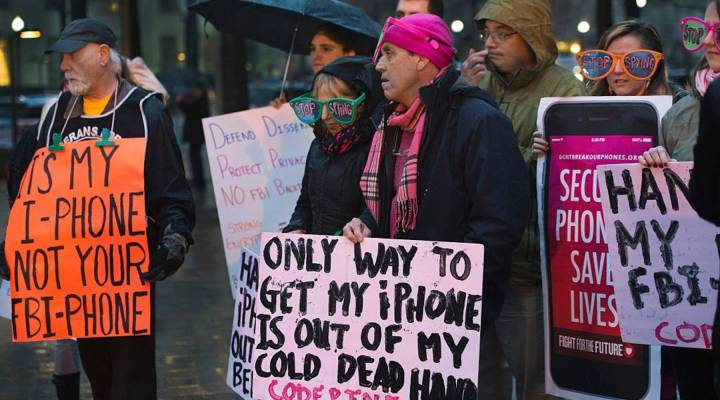 COPY
rotesters demonstrate outside the Federal Bureau of Investigation (FBI) headquarters building in Washington, DC, February 23, 2016, objecting to the US government attempt to put a backdoor into the Apple iPhone.  PAUL J. RICHARDS/AFP/Getty Images

rotesters demonstrate outside the Federal Bureau of Investigation (FBI) headquarters building in Washington, DC, February 23, 2016, objecting to the US government attempt to put a backdoor into the Apple iPhone.  PAUL J. RICHARDS/AFP/Getty Images
Listen Now

Apple’s very public fight with the FBI has other tech companies scrambling to bump up their encryption practices.

“I think you will see, if not an arms race, everyone trying to get something out there,” said Matthew Green, a professor at Johns Hopkins Information Security Institute.

Green  says many big tech players are already well into the process. Google, Facebook and Snapchat have all reportedly been beefing up encryption practices for a while.

But with all the attention generated by the Apple case, Green expects smaller companies will take similar steps, and that they will be more vocal about publicizing them. “I think there’s  a lot more interest with management seeing what’s going on with Apple,” he said.

And it’s not just management that’s paying attention to encryption.

“Now it’s become clear to customers how important it is,” said Susan Landau, a professor of cyber security at Worcester Polytechnic Institute and former privacy analyst at Google.

She said between the Edward Snowden scandal and the Apple-FBI smack down, consumers are demanding stronger encryption.

And those companies that provide it can gain a competitive edge. But it’ s not without costs.

“In certain cases having your data not encrypted is part of your assets, because you can do search on it, you can extract interesting statistics from it,” said Giovanni Vigna,  a computer science professor at UC Santa Barbara. Translation: You can use it to target advertising.

And, these days, maybe a bigger legal team, too.

Are iPhones the new burner phone?