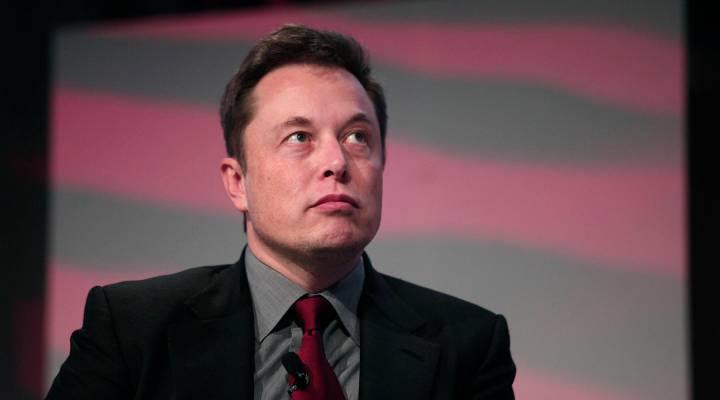 COPY
"Engineering and design is what I spend most of my time on," says Elon Musk, co-founder and CEO of Tesla Motors. Bill Pugliano/Getty Images
Corner Office

"Engineering and design is what I spend most of my time on," says Elon Musk, co-founder and CEO of Tesla Motors. Bill Pugliano/Getty Images
Listen Now

This interview originally aired on October 12, 2015.

Elon Musk is a busy man. Last year, his rocket company, SpaceX, was awarded billions of dollars in contracts to help take astronauts into space. His electric car company, Tesla, just released a new model aimed at the SUV market. And, oh yeah, he’s determined to get humans to Mars.

Musk is CEO of SpaceX and Tesla, and he hasn’t hinted at dropping his top position at either company. Marketplace host Kai Ryssdal got Musk to slow down enough for an interview at the Tesla factory in Fremont, California.

Kai Ryssdal: The question though really is, as you look around this plant, and as you work on 1,000 cars a week, right? Is that what you make here, plus or minus?

Ryssdal: Yeah? Is this where you thought you’d be?

Musk: It really depends when you say “where” .…

Ryssdal: I’m pausing here just because that’s an interesting thing for a guy running a big company like this to say.

Musk: Well, of course, the track record for car company startups is extremely poor. In fact, the only car companies in the U.S. that have not gone bankrupt are currently Ford and Tesla.

Ryssdal: So what is it about entrepreneurialism for you? ‘Cause clearly that’s what’s going on here, right?

Musk: Yeah. I mean, I do think creating a company to produce a product or service that people love is — that’s very rewarding, no question. What I’m trying to do is, I mean, at a broader philosophical level, is I’m trying to minimize existential risk in the future. That’s what I’m trying to do.

Ryssdal: OK, so that gets me to something I’ve been thinking about. There’s a question to put to you that’s the Steve Jobs question, and bear with me for a minute, right? You’re compared to him every now and then: visionary, transformational companies that you’re running. But you always sort of got the sense that Steve Jobs just wanted to sell stuff. He wanted to make cool stuff but then he wanted to sell it. I wonder if, with these two companies you’re running, whether you want to change energy use in this country in our lifetime and also, oh, by the way, transport humanity to Mars.

Musk: Yes, absolutely. That’s what I’m trying to do. Like I said, it’s all under this broader philosophical goal of minimizing existential risk. Essentially, trying to make the future good. That’s my goal. I try to be as helpful as possible in that direction. And things have worked out a lot better than I expected. I sort of really expected things to not work out, actually.

Ryssdal: Talk to me for a minute about failure. About the value you put on it and about how much you tolerate in this company.

Ryssdal: OK, so let me ask you a more specific question. The falcon-wing doors on the Model X. How many iterations, how many failures did you have in what is really sort of a breakthrough kind of thing?

Musk: Quite a few failures actually. We tried quite a few iterations on the door. And I’ll tell you what we were trying to achieve. What we were trying to achieve is, how do you directly access the third row while still having child seats in the second row? …. So then you’re like, “Wow, I’ve got this big SUV, but then I can’t use a large portion of it.” So in order to do that, you have to have a big opening — a sliding door — and then you’ve got to support the sliding door with three pins.

Ryssdal: And hinges and all that stuff, yeah.

Musk: And then the three pins, they sort of create like a gash along the side of the car, which doesn’t look good either. In order to have the car look good, you can’t make it slide. So then you’ve got to open it in some way. But a traditional gull-wing door only has one hinge, and so it opens up too far outward and too far up. And so the way that we solved this was by putting a second hinge and thus calling it a falcon-wing door instead of a gull-wing door, because it’s got two independently actuating hinges, and it opens up instead of outward.

Ryssdal: Which part of your job do you enjoy more: getting out there with the engineers and getting your hands dirty — and I know the answer to this question before I ask it — or sitting in management meetings where you have to figure out the HR policy for this company? I mean, you default to engineering — it’s kind of clear as we talk.

Musk: Actually, engineering and design is what I spend most of my time on. I mean, right now, maybe 3 percent of my time is spent on things like interviews and media and that kind of thing. I think sometimes people think it’s a lot more than that. But it’s only, maybe less than 3 percent. Because it’s less than a few hours per week…. I like engineering. I also like design aesthetics. It really gets me fired up when somebody buys the car and they love it.

Ryssdal: It’s been a big couple weeks for you, with the roll out of the Model X and the presentation. I wonder if you worry about this company and yourself being overexposed.

Musk: We are overexposed from time to time. I’m gonna be reducing my media activity to more like 1 percent instead of 3 or 4 percent. But mostly just because I need more time to focus on actually building the products.

Musk: Long term, I’m sure I won’t be running either company because I’ll be retired or dead or something.

Ryssdal: OK, so here’s a better question: What would it take for you to stop day-to-day management of either one of these companies? And I acknowledge that Tesla is publicly traded, and you’re talking to investors — and I get that.

Musk: I expect to be with SpaceX and Tesla for as long into the future as I can imagine.

Musk: Well, like I said, we are trying to change the nature of transportation. So definitely, scale matters, because more electric cars means more change in the way we transport people. In the case of Tesla — hopefully this is a false dichotomy — but I suppose I’d rather be a low-profitability company that’s larger than a small company that has higher percentage profitability. But I think that’s probably a false dichotomy. I think, ultimately, it can be a big company that is profitable. Although, obviously, we’re not profitable today.