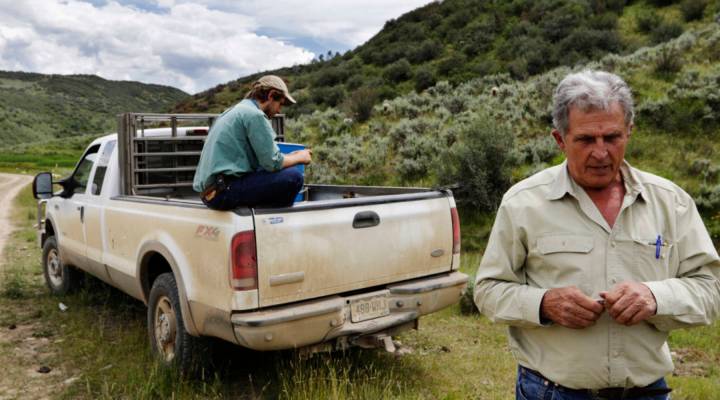 Should sheepherders get a pay raise?

COPY
Most sheepherders in the U.S. are immigrant guest workers who are not subject to the federal minimum wage. The department of labor is looking into a pay raise. Joe Mahoney/Rocky Mountain PBS I-News

Should sheepherders get a pay raise?

Most sheepherders in the U.S. are immigrant guest workers who are not subject to the federal minimum wage. The department of labor is looking into a pay raise. Joe Mahoney/Rocky Mountain PBS I-News
Listen Now

Hundreds of sheep crowd a mountain road in northwest Colorado, where, like most states, the sheepherders are typically not Americans. They are immigrant guest workers on H2-A visas who are not subject to the federal minimum wage

Ignacio Alvarado came here from Chile in the ’90s to be a sheepherder and now reaches out to the herders for local community groups. Herders are required to be on call 24/7 to protect the flocks and keep them moving to new food and water.

“They work a lot of hours in the cold, wind, snow, whatever the weather. They are always with the sheep,” Alvarado said. “It’s a lot of sacrifice for little pay.”

Instead, in Colorado and many other states, the minimum wage for immigrant sheepherders is $750 a month. It’s gone up only $50 in the past two decades.

Now, the Department of Labor is proposing a pay raise. That raise is based on average farmworker wages in each state. In Colorado, that raise would be to around $2,400 a month.

The sheep industry is up in arms against the proposal.

Herders are on call 24/7 to protect the flock. Above, sheep graze outside Meeker, Colorado. (Joe Mahoney/Rocky Mountain PBS I-News)

In a nearby ranch, manager Tom Kourlis showed the camp where one of his sheepherder lives, what looks like a mini-Airstream trailer, with horses and hay parked nearby. The trailer includes solar panels, a refrigerator and a gas or propane stove, he said.

Kourlis argued that a sheepherder’s compensation includes food, water and shelter. He said the new regulations would end his family ranch and send ripples through the local economy.

Sheep industry representatives have made a counter-proposal to the Department of Labor. Raise the wage for sheepherders to around $1,400 a month for all states.

“If we can afford it, I’m delighted to pay it,” Korlis said.

The Department of Labor will release the final rule by November.