The invention of the Chicken McNugget

The invention of the Chicken McNugget

You might not think chicken nuggets needed to be invented. Whether you buy the McNuggets from McDonald’s or the freezer pack variety from the grocery store, the concept is the same. But mass producing the nuggets for storage and transport wasn’t easy at first.

“You have to have all this chopped up chicken junk and be able to coat it and have it not all fall apart. And be able to freeze it and store it… That takes some complicated engineering,” says Atlantic editor Jordan Weissmann, who looked into the nugget’s history when former McDonald’s CEO Fred Turner died last week. Turner championed the McNugget during his tenure at the company, along with drive-through windows and Egg McMuffins.

In the 1970s, McDonald’s was looking for a chicken product, as consumers learned more about cholesterol and began turning away from beef. What they may have found was the research of Cornell poultry scientist, Robert Baker.

“He would find ways to make chicken hash, chicken meatloaf, just different ways to expand the market for poultry,” which, Weissmann says, wasn’t that large in the 1970s. “One of his innovations was this thing called the chicken stick.”

The chicken stick is a likely predecesror to today’s nuggets, and an unusual story in today’s patent-obsessed corporate world. Baker distributed his research for free to hundreds of companies in the form of short bulletins.

“He never patented any of his work,” says Weissman. “He gave it away with the idea of expanding the chicken market.”

Years later, as McDonald’s developed a chicken product, they were looking for something “like a French fry, in chicken form,” according to Weissman. “This academic research had sort of infiltrated its way through the industry; it permeated it.”

McDonald’s might have arrived at a freezable fried chicken product on its own, with a push from the market. But one cannot imagine that Baker’s research, if done today, would not have been patented.

“At one point research was kind of meant to feed this collective pool of knowledge, of know-how that an economy had,” Weissmann says. “In a lot of instances, you don’t need strong patent laws to encourage people to invent.” 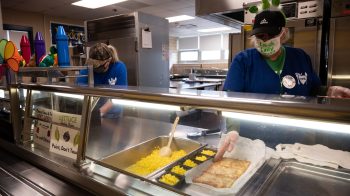