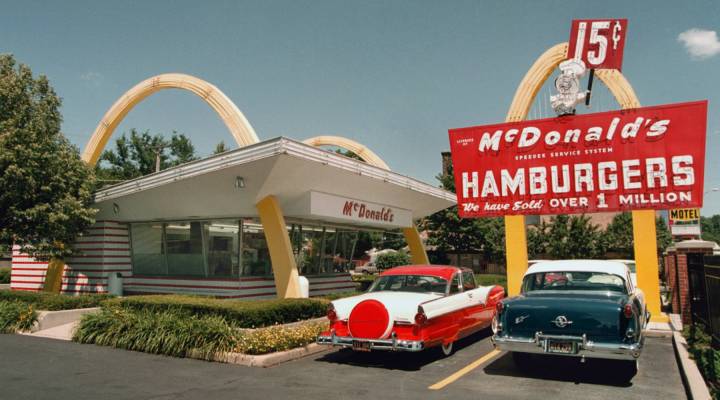 COPY
A 1955 Ford, left, and a 1955 Oldsmobile are parked in the lot of the McDonald's museum in Des Plaines, IL.  Tim Boyle/Newsmakers

A 1955 Ford, left, and a 1955 Oldsmobile are parked in the lot of the McDonald's museum in Des Plaines, IL.  Tim Boyle/Newsmakers
Listen Now

You might not think of a global multi-billion dollar conglomerate as the tie that binds local communities.

But it can be, and it sells Chicken McNuggets at the same time.

Guardian reporter Chris Arnade has criss-crossed America to cover poverty, addiction, and the factors that bring us together (or divide us). And one of the things he’s found that does bring us together is McDonald’s, where people can go to get a cheap meal, play board games, or clear their heads. Arnade stopped by to talk about the fast food giant’s appeal and his experiences speaking to people at its franchises. Below is an edited transcript.

Chris Arnade: I call them ad-hoc community centers. I kind of say if you give people a landscape, a world of fast food franchises, they’ll form communities within a world of fast-food franchises. There’s often four or five different morning groups. Some of them give themselves names — ROMEO club, the Retired Old Men Eating Out. There are church groups that meet in McDonald’s, bible studies in McDonald’s. There are regulars who play chess games in McDonald’s.

David Brancaccio: But I hear the irony that you’re embracing here. I mean, McDonald’s Corporation has these pre-fab chain outlets, but you have these authentic experiences inside.

Brancaccio: So, Chris, give me an example. You’re sitting in a McDonald’s where, and what did you learn one day?

Arnade: I was in Battle Creek, Michigan, and one of the elderly women there, I asked her age. She was 86, I believe, and she says, “I’m glad I’m old.” And I looked at her and say, “What do you mean? What do you mean you’re glad you’re old? She goes, “I wouldn’t want to be young. I met my husband on the factory floor and we walked out of high school together. We got jobs. We built a wonderful life. She says, “I don’t see that for my children or my grandchildren.” That codified so much of what I saw across the country of people who just felt the world wasn’t working for them.