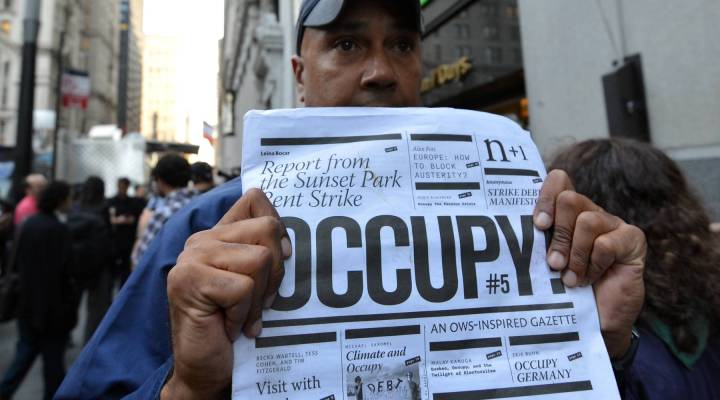 A man holds a sign as Occupy Wall Street protesters march near Wall Street on the one-year anniversary of the movement in New York. Stan Honda/AFP/Getty Images

Monday marks the one-year anniversary of Occupy Wall Street — the day protestors set up camp in Zuccotti Park in New York, throughout the fall camps sprang up around the country. Twitter and Facebook were abuzz. Local TV news did liveshots from tents. But the demonstrators were eventually evicted.

And now the question is what the whole effort actually accomplished. But before we get to that question, hear from some of the folks who participated in the Occupy movement through letters they wrote to financial institutions.

Click on the audio player above to hear the letters and to listen to our interview with editor Mark Greif, who wrote a book called “The Trouble is the Banks,” which compiles some of the letters written by Americans who could not make it to an occupation.