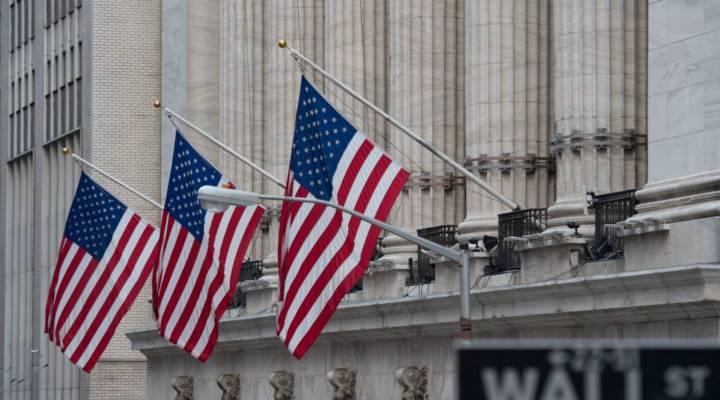 COPY
"Wall Street writ large," author William Cohan says, "is this whole huge finance effort worldwide that really importantly provides capital to people who need it by taking it from people who have it to invest." (BRYAN R. SMITH/AFP/Getty Images)

"Wall Street writ large," author William Cohan says, "is this whole huge finance effort worldwide that really importantly provides capital to people who need it by taking it from people who have it to invest." (BRYAN R. SMITH/AFP/Getty Images)
Listen Now

In the American psyche, few phrases have more baggage attached to them than “Wall Street.” Depending on whom you talk to, Wall Street is either the backbone of American capitalism or part of a rigged system that makes the rich richer. William Cohan worked on Wall Street for 17 years and has written several books on the subject. Marketplace host Kai Ryssdal talked with him about his latest book, “Why Wall Street Matters.” Below is an edited transcript of their conversation.

Kai Ryssdal: I think we need a definition at first, right? And you talk about this early in the book, what Wall Street actually is versus what people think it is.

Ryssdal: But let’s stipulate here early on that Wall Street, with the acquiescence of a large part of the American public through, you know, refinancing their houses and taking the money out and doing all that stuff, but Wall Street did great damage to this economy in the past 10 years.

Cohan: Couldn’t agree with you more. One of the biggest mysteries still out there is why the Justice Department didn’t prosecute. Now, having said that, there was a vacuum created, no one prosecuted, the American people angry. Into that vacuum stepped politicians, many of whom demagogued the issue, regulators, many of whom just delighted in, frankly, throwing sand into what is really an incredibly beautiful machine. The machine of Wall Street, the machine that has given us Apple and Google and Facebook, that is an incredible machine. I believe we need to have a fact-based debate about what Wall Street does right and what Wall Street does poorly, and fix the things that it does poorly and celebrate the things that it does right.

Ryssdal: Just on this idea of regulation — there is going to be another financial crisis, that’s not very much in doubt. Your objection to the regulation that has been done so far, is that what’s been tried is to make it completely safe and risk free, when in reality, you just need to mitigate the risk somehow and make it less.

Cohan: And look, I worked on Wall Street for 17 years. People do what they’re rewarded to do on Wall Street. If you reward them to take prudent risks, that’s exactly what they’ll do. If you reward them to take big risks with other people’s money and have no accountability for their actions, that’s what they’ll do too. All I’m asking for is a marrying of smart regulation with smart rewards and smart incentives. I think we’re close to the first part of that with Donald Trump, believe it or not, and it pains me to say that. I don’t hear anybody talking about the second part.

Ryssdal: And the second part, just to be clear here, is that you think bankers, Wall Street writ large, ought to be personally on the hook when something goes south. They ought to have — lock stock and barrel — their homes, their cars, all of that jazz on the line.

Cohan: Yes, everything. By the way, just like it used to be when they were private partnerships. I mean, most of Goldman Sachs’ 160-year existence was as a private partnership with the partners had, you know most, if not all, of their full net worth on the line. Instead of doing what is obviously right for the American people by aligning the incentives of Wall Street with the outcomes the American people need, instead of having Wall Street privatize the gains and socialize the losses, which is what happened in 2008. We need to have this revamp. It needs to be a grand bargain with Donald Trump. Let the great deal-maker-in-chief in Washington make this grand bargain with the American people and Wall Street.

Ryssdal: All right, so here comes the $64,000 question: Lay odds for me on any of this happening.

Cohan: It comes down to guts, courage. That’s one of the reasons I wrote this book, to make this argument clearly. Now, maybe it’s too much to ask that somebody will step up and be a leader. This is long overdue. This is long overdue. And it’s not that hard to change, and it’s not something that they’re not familiar with. So just do it because it’s the right thing to do. You know, when was the last time that somebody did something just because it was the right thing to do?

Ryssdal: Bill Cohan writes on Wall Street a lot. His latest book is called “Why Wall Street Matters.” It’s a history lesson, it’s thoughts and insights, and it’s not long; it’s about 150 pages. It’s a good read. Bill, thanks a lot.

Cohan: Thank you, Kai. Always a pleasure to be with you.