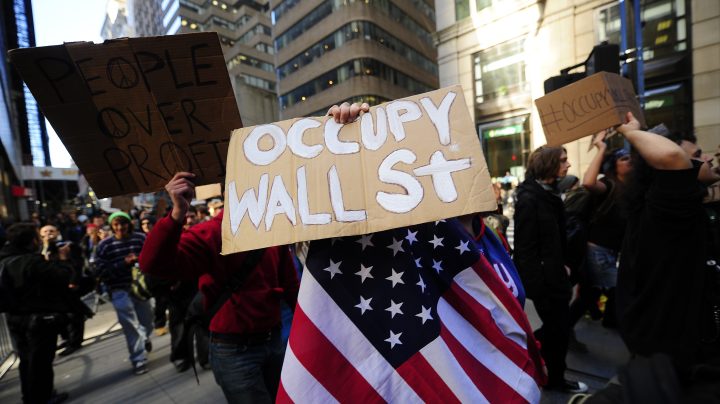 Friday marks 10 years since protesters camped in Zuccotti Park in Manhattan’s financial district, beginning the Occupy Wall Street movement. Employing the slogan “We are the 99%,” occupiers decried corporate greed, social and economic inequality, and political corruption. Even though the protests were short-lived, many believe the Occupy movement stirred a new conversation around economic inequality.

Directly after the protests, commentators were critical of the Occupy movement, saying it misused its media attention to push forward a singular mission. However, Occupy Wall Street drew attention to the massive gap between the ultrawealthy and ordinary Americans. Now, many experts say the movement laid the groundwork for the economic platform of the modern Democratic Party.

“Marketplace” host Kai Ryssdal spoke with David S. Meyer, a professor of sociology at the University of California, Irvine, about the Occupy movement’s impact 10 years on. The following is an edited transcript of their conversation.

David Meyer: Occupy didn’t get what most activists who are engaged in it wanted, but that didn’t mean it didn’t matter. So, the business of social change is tough. You never get all you go for, and you usually don’t get credit for what you do get. So, when we look back at Occupy 10 years later, it makes sense to take stock, not of all the things that didn’t happen — an egalitarian, just society, where everybody has health care and there’s no political and economic inequality — count that a loss, but that doesn’t mean that Occupy didn’t make a big difference in the political debate. Because it did.

Kai Ryssdal: I mean, I’m asking you an impossible question here, but as they started occupying Zuccotti Park, what were they thinking, do you suppose?

Meyer: Hard to see it. So, [Sen. Bernie Sanders] had been making the same speech for 35 years before that. I mean, he updates the stats, which is admirable, but he’s got the same story. And suddenly, there’s an audience ready to listen to it, a larger audience ready to listen to it. And Bernie fills in and steps into the breach. And because he did so well in the primaries — he demonstrated the appeal of the sets of policies that he was pushing — other people, candidates for office, stepped in, and you know, picked up the sheet music and started singing it their own way. So when we look at the campaigns about student debt, the Fight for $15, Occupy Homes, all of those things got a big boost from Occupy, even if they didn’t start with Occupy.

Ryssdal: All right. Well, I don’t want to try to make too neat a historical turn then here, but as you look at this moment now, right? Sen. Sanders, as the chair of the Senate [Budget] Committee, is leading the fight for this $3.5 trillion infrastructure package, which is running into some trouble for a whole lot of reasons, and President [Joe] Biden is trying to make this moment about the role of government in this economy and what it can do for people, right? It’s the soft part of the infrastructure program. This is a weird question: Do you think the memory of Occupy can help carry the day for them?

Meyer: I can’t tell you what’s gonna carry the day. What Occupy did is it gave them a sense that other people cared about the same thing. It reinforced their passion. And it gave them a strong Progressive Caucus within the House of Representatives. Occupy affected the people who were involved in it and the people who were watching it. So there’s a whole generation of people who stopped by an occupation or slept outside for a week or six because they wanted to do something about political and economic inequality. Is it enough? Today, when we’re doing this interview, you know, 10 years after Occupy, I can’t tell you the answer to that.

Ryssdal: I was gonna let you go. But I do have to point out here that inequality in this country is greater now than it’s ever been, even after Occupy.

Meyer: Jeez, wouldn’t it be great? It makes for a great story when we talk about social movements of the past. When we say Martin Luther King [Jr.} spoke at the demonstration in 1963, and then in 1965, they passed the Voting Rights Act. That’s a really great story. It’s a short story, you could do it in a sitcom-length TV show or even a documentary. But in real life, these struggles take a very, very, very long time. It takes a long time to change the world.